NX 450h+ tested. Is Lexus’ first plug-in hybrid the best of the NX?

O Lexus NX is the best-selling model of the Japanese brand in Europe and now, in the second generation, in addition to the 350h (conventional hybrid that does not need to be plugged into an outlet), it has received an unprecedented plug-in hybrid version, called 450h+ , which promises to help cement even more this position.

Diogo Teixeira had already «felt his pulse» about half a year ago, in Las Palmas, Spain, but now I was finally able to test this Lexus NX 450h+ on national roads.

And the most important question is just one: is this new plug-in hybrid variant the one that makes the most sense to buy? I did 862 km with it in five days and I’ll give you the answer in the next few lines. 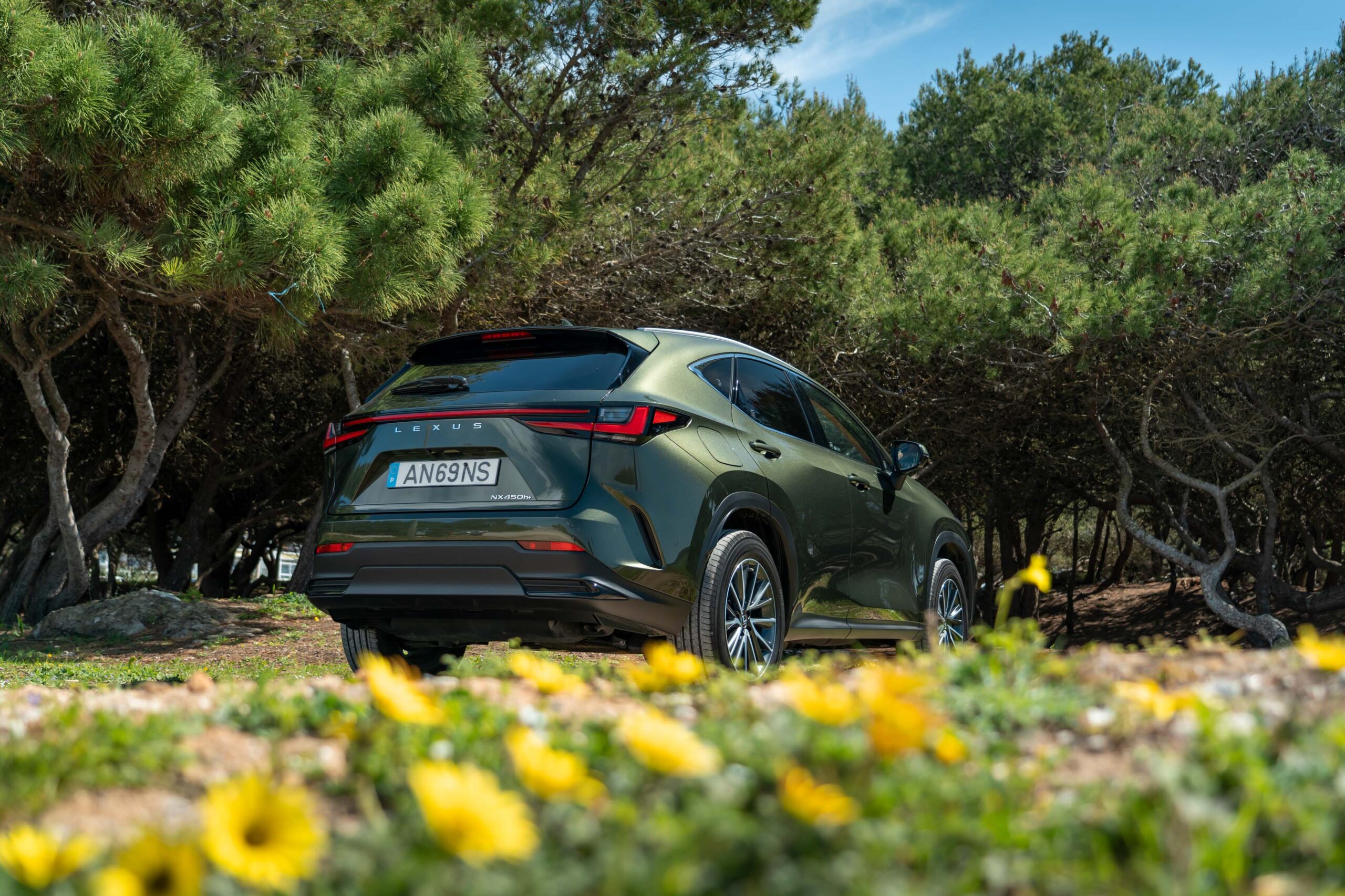 At the back, the NX adopted a light signature with a horizontal bar joining the two taillights and now has the brand’s lettering in the center, instead of the logo. © Thom V. Esveld / Automotive Reason

The wheelbase also increased by 3 cm and this had a positive impact on livability, especially in the second row. But we’ll talk about that later.

However, and probably the most noticeable change is in the general image of this model, which is now more European than ever. It is true that the huge front grille continues to mark the identity of this SUV, but it is impossible to ignore the smoothing of the lines of the new NX, a decision that should please the clientele of the «old continent». 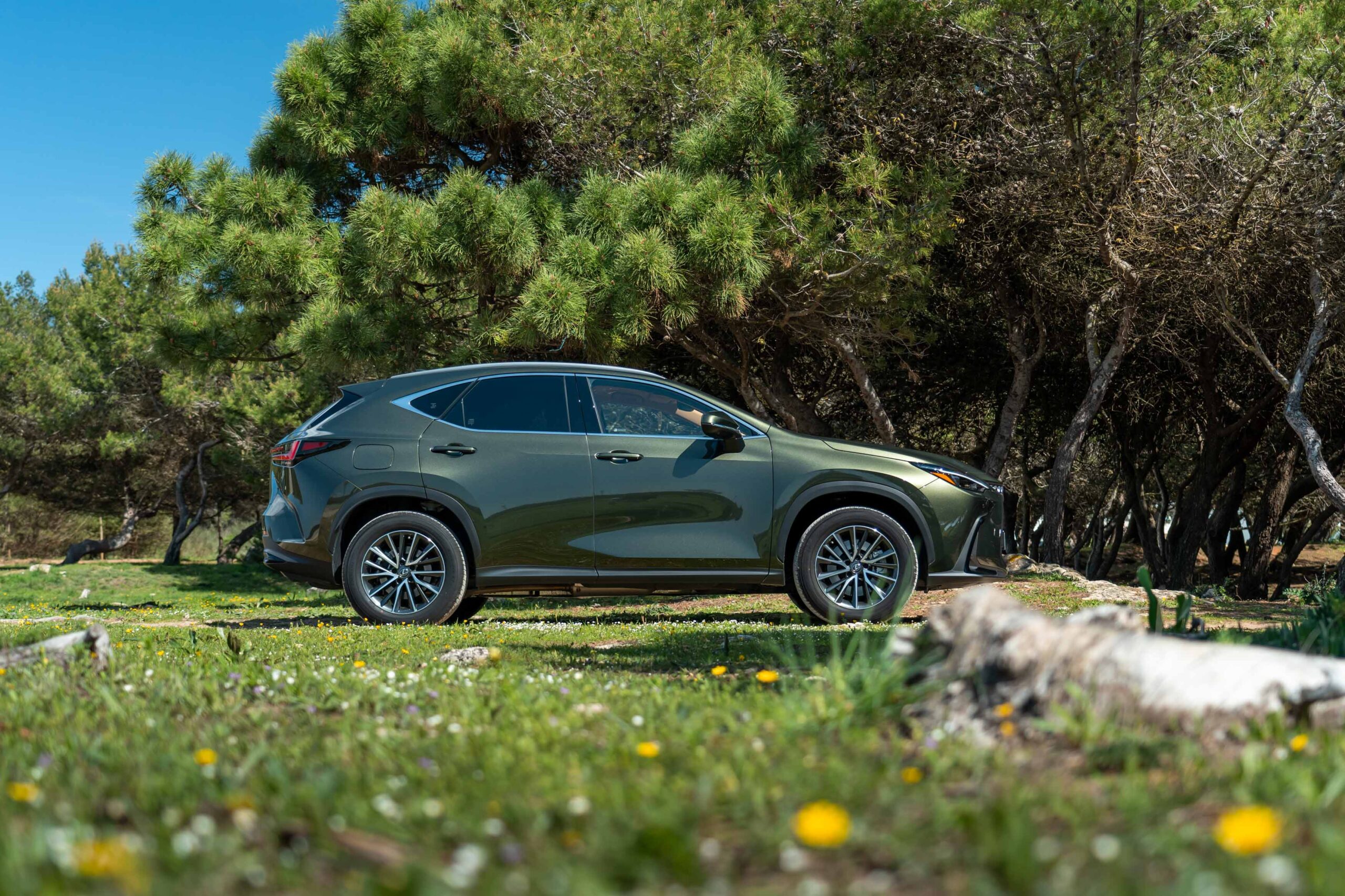 Compared to the first generation, the new NX is slightly longer, wider and taller (about 20 mm in all directions) and the wheelbase has also been extended by 30 mm (2.69 m in total). © Thom V. Esveld / Automotive Reason

In the cabin, a revolution

Inside this Lexus NX, the Japanese omotenashi philosophy prevails, something that can be translated as Japanese hospitality. And this is visible in almost all commands and surfaces of this model.

Lexus wasn’t afraid to completely change the interior design and that deserves a round of applause. Mainly because the end result is very good. 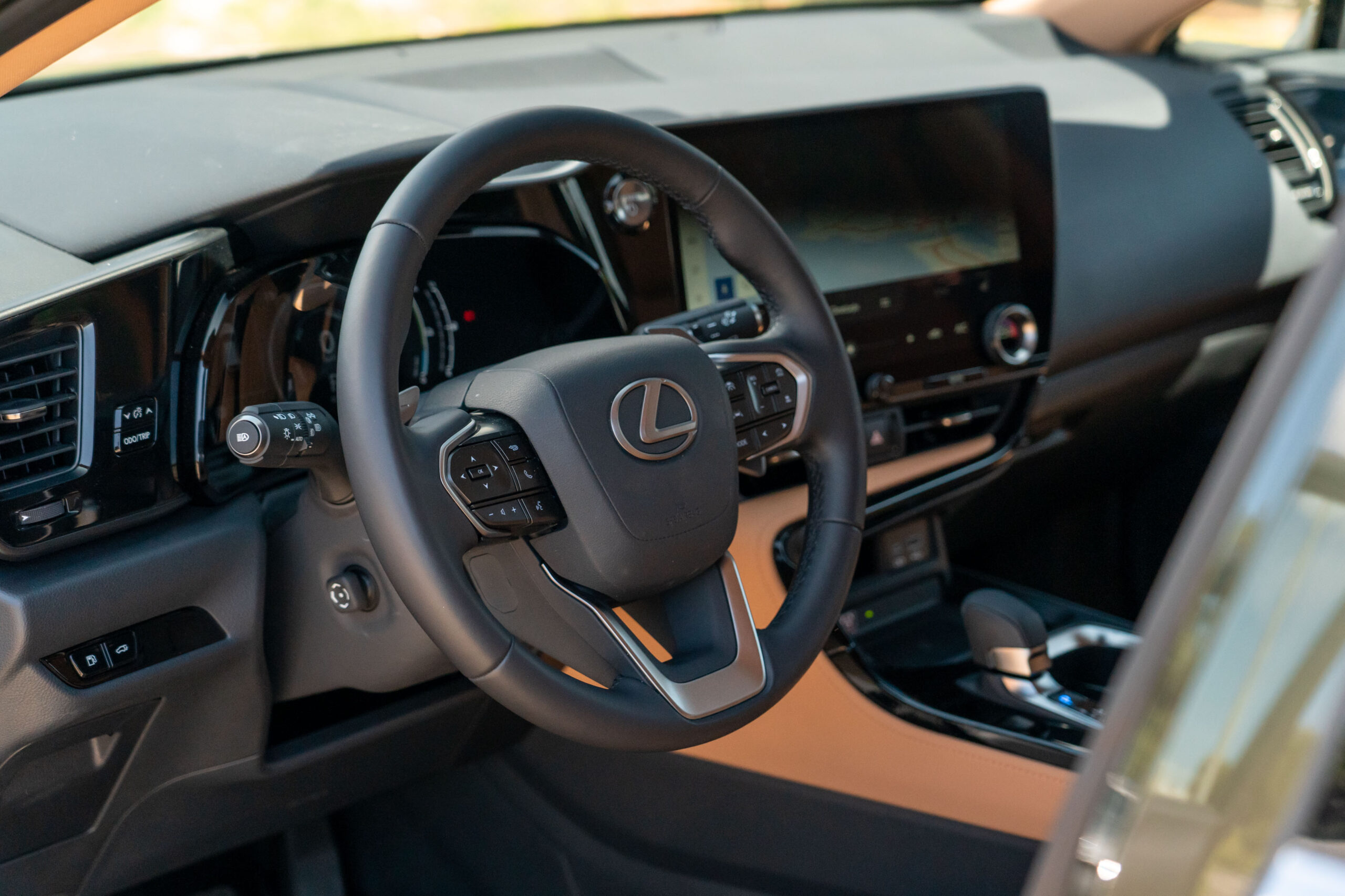 The interior clearly breaks with the predecessor’s design. The quality of assembly and materials stands out. © Thom V. Esveld / Automotive Reason

The assembly quality is very good, as is the feel of all the materials that are visible.

At the same time, it’s all very functional and simple to operate, especially for those sitting in the driver’s seat. Note that this is the most prominent place within this cabin. 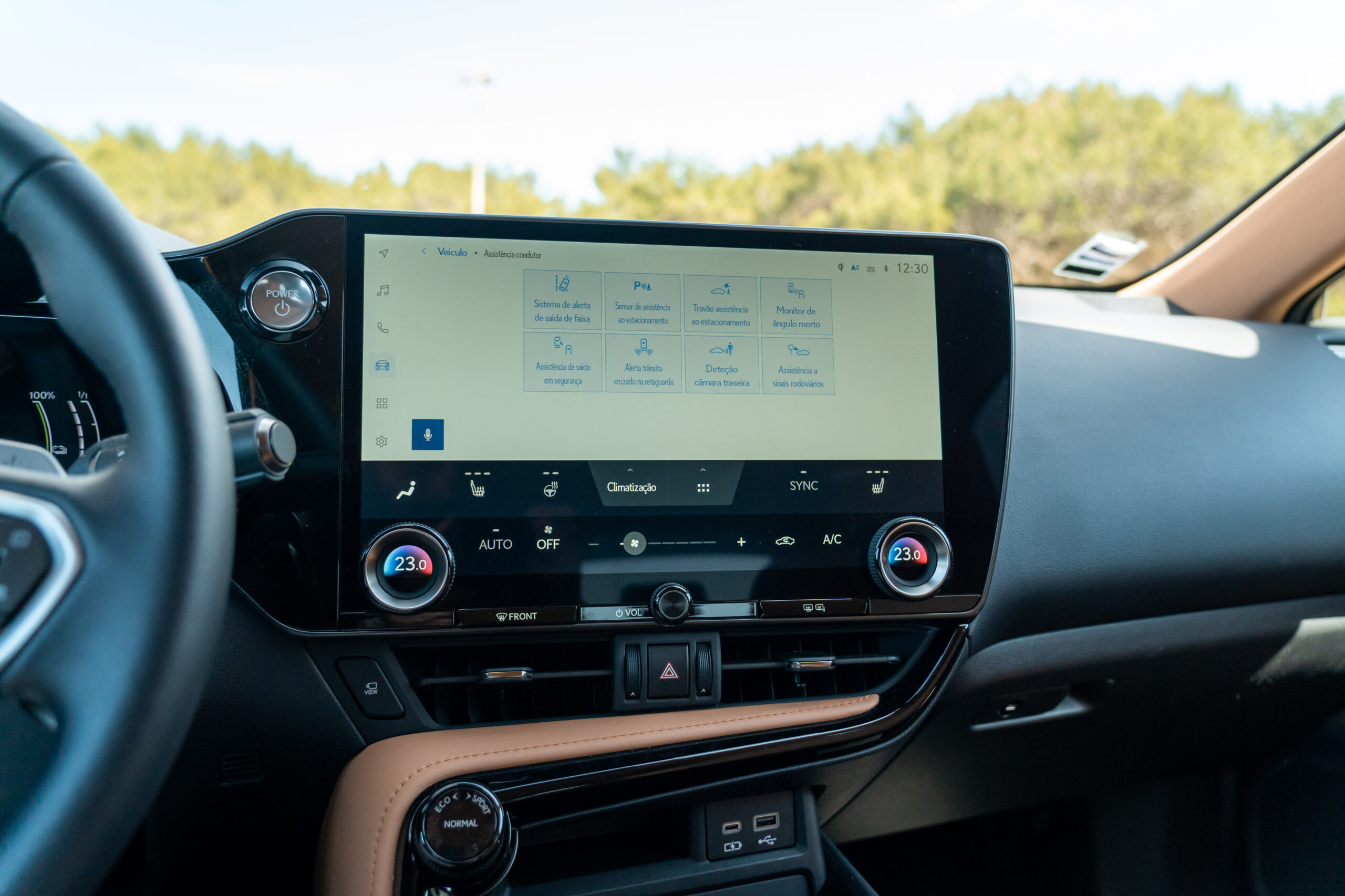 The 14” central screen is one of the protagonists in the cabin of this new Lexus NX. © Thom V. Esveld / Automotive Reason

It was precisely at the level of the interior that this NX evolved the most in this second generation. And here, a very important note for the digital instrument panel and, above all, for the huge 14” screen, which in Portugal is offered as standard in all versions of the model.

Aiding the central display and, above all, the digital instrument panel, we still have a head-up display system that simulates a 10” screen. 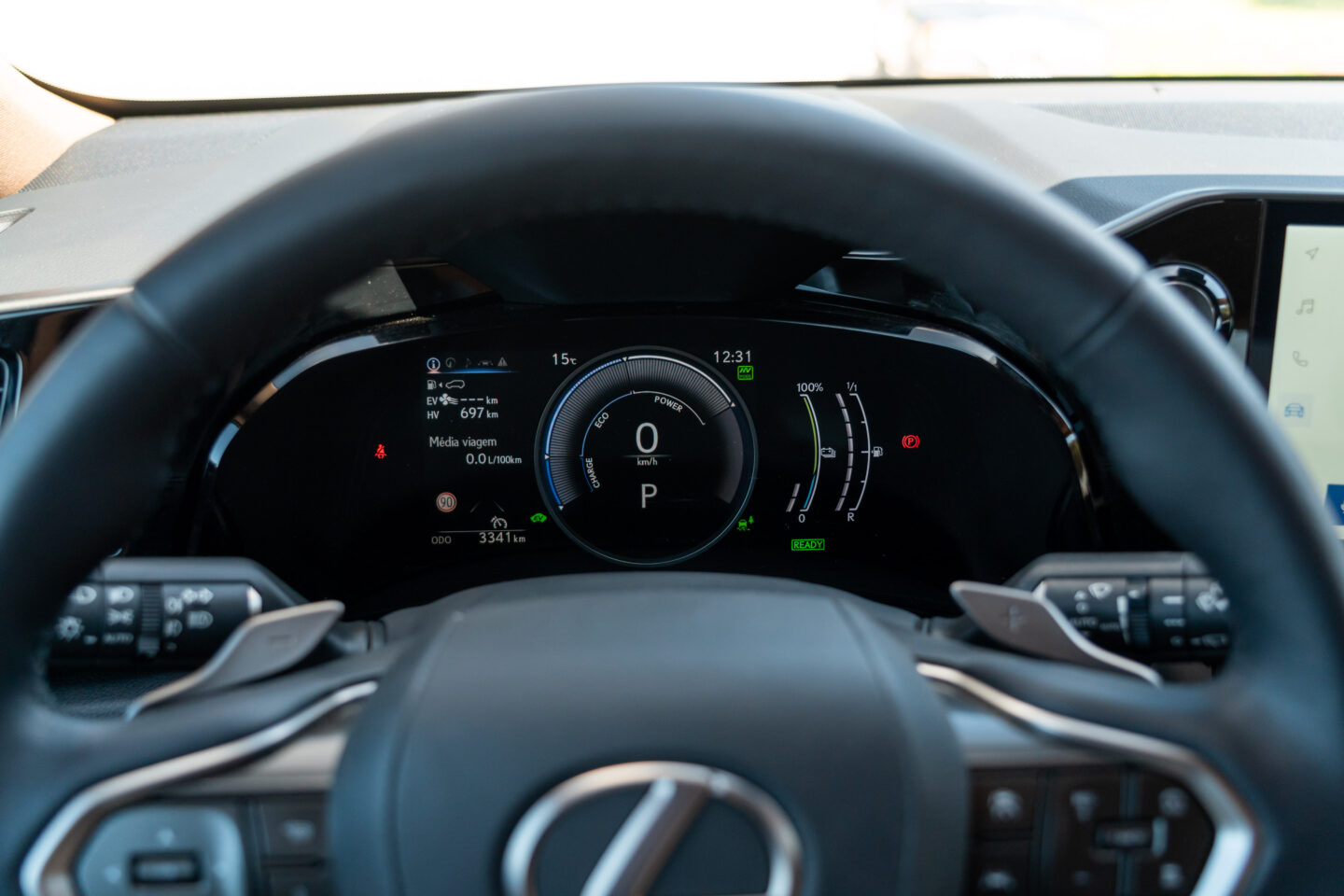 The 7” instrument panel is beautifully complemented by the head-up display system. But the graphics are still a little confusing.

The space in the second row of seats is satisfactory and more importantly, the plug-in hybrid version did not suffer in terms of load volume in the luggage compartment compared to the conventional hybrid, at 350h.

For this reason, it offers a minimum value of 545 l, a figure that can grow to 1436 l with the rear seats folded down. 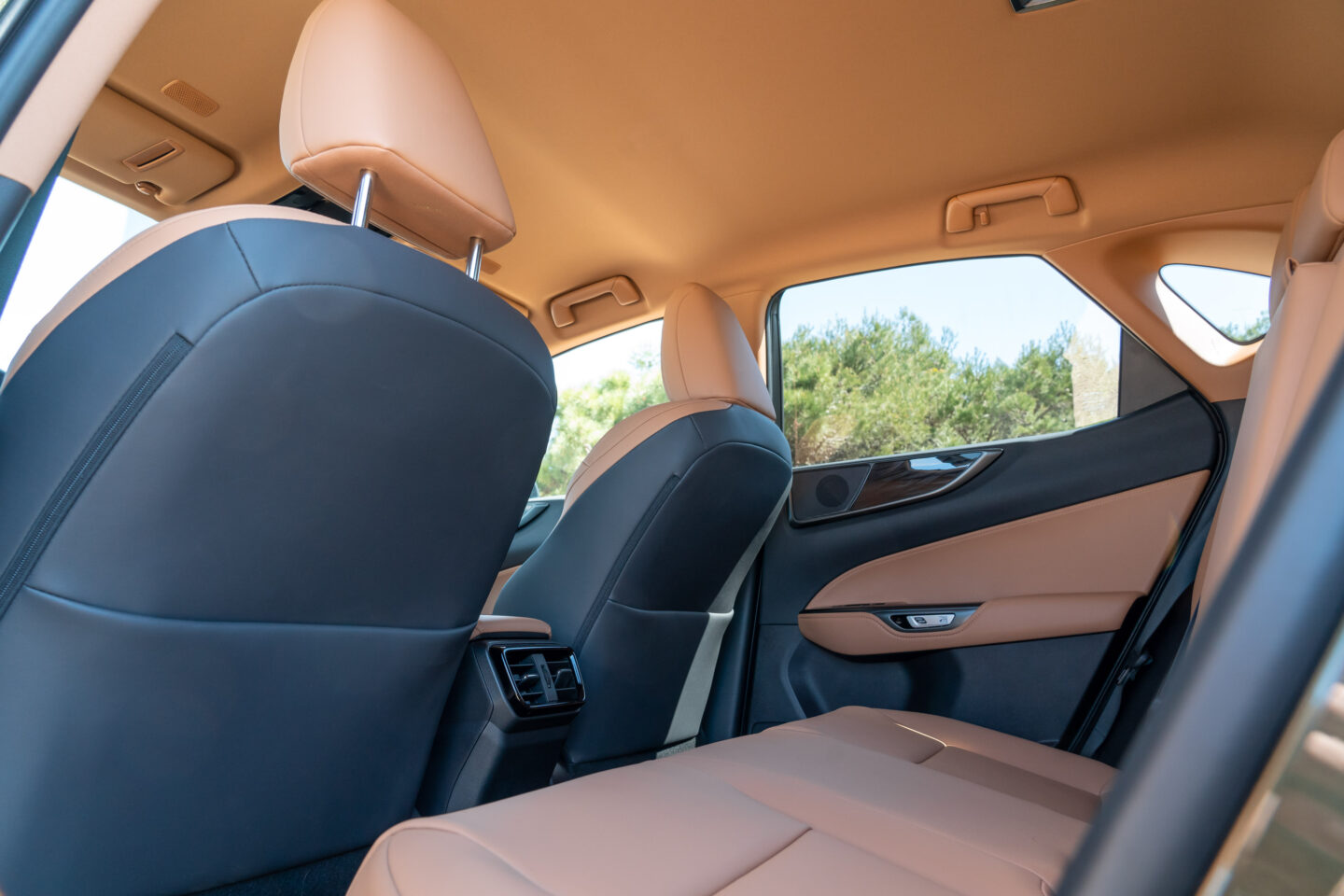 Space in the second row of seats is very satisfactory and allows two adults of average height to comfortably seat.

How do you behave on the road?

The differences to the first-gen NX are more than obvious. In fact, they are giants.

And it all starts in the driving position, which is very comfortable. The steering wheel has an excellent grip, offers a very wide range of adjustments and allows us to find a satisfactory “fit” that is well aligned with the seat and the pedals. 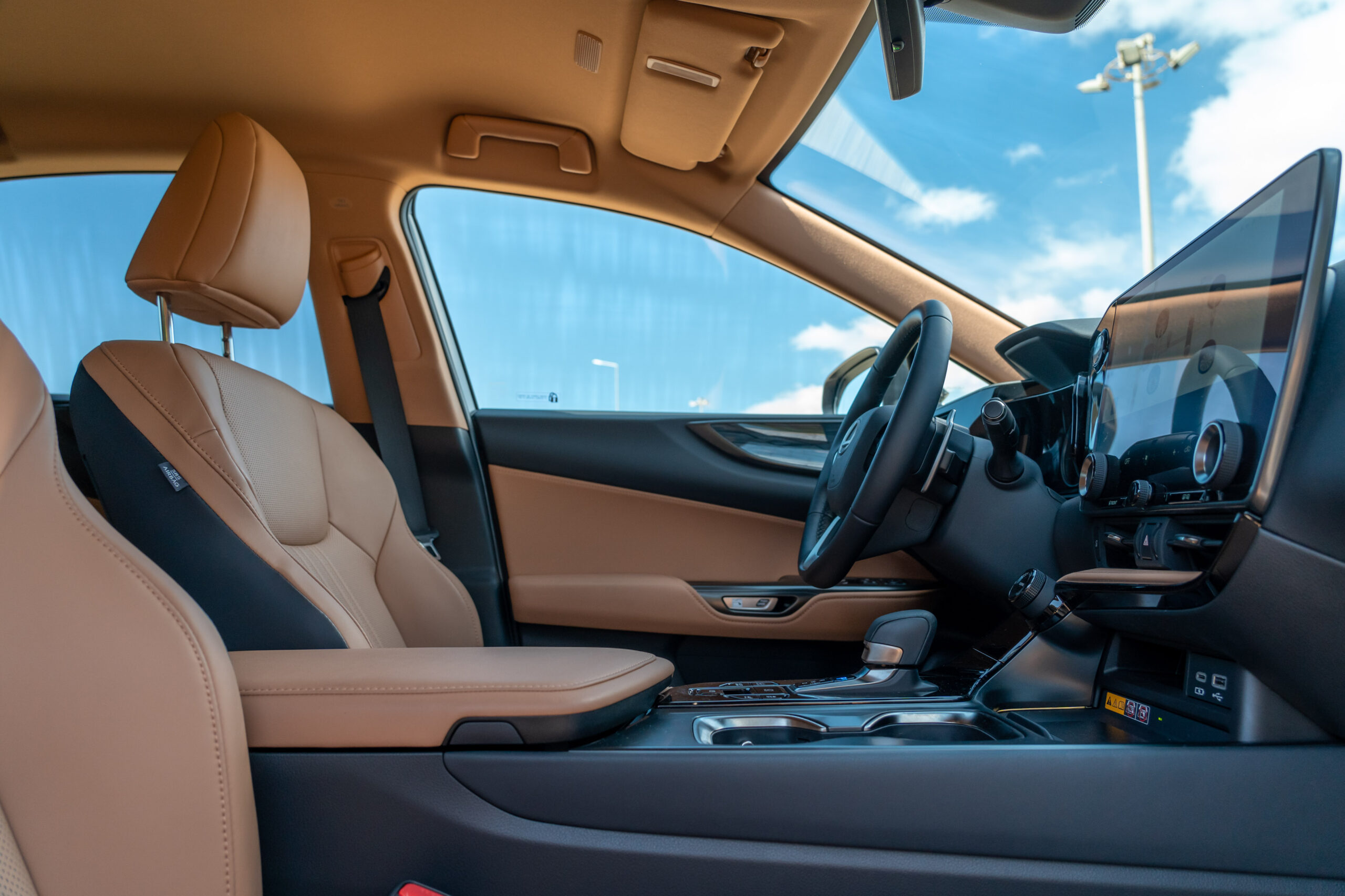 Then, highlight the suspension, which guarantees more precision and provides us with a much more comfortable feel.

The steering is also more direct and precise than I expected, although this NX is not, by far, an example of an SUV with sporty and engaging dynamics. Here, Germanic rivals have the upper hand.

Above all, the NX 450h+ is always very neutral in terms of behavior. It is stable, quite predictable and manages to control the lateral movements of the body well. 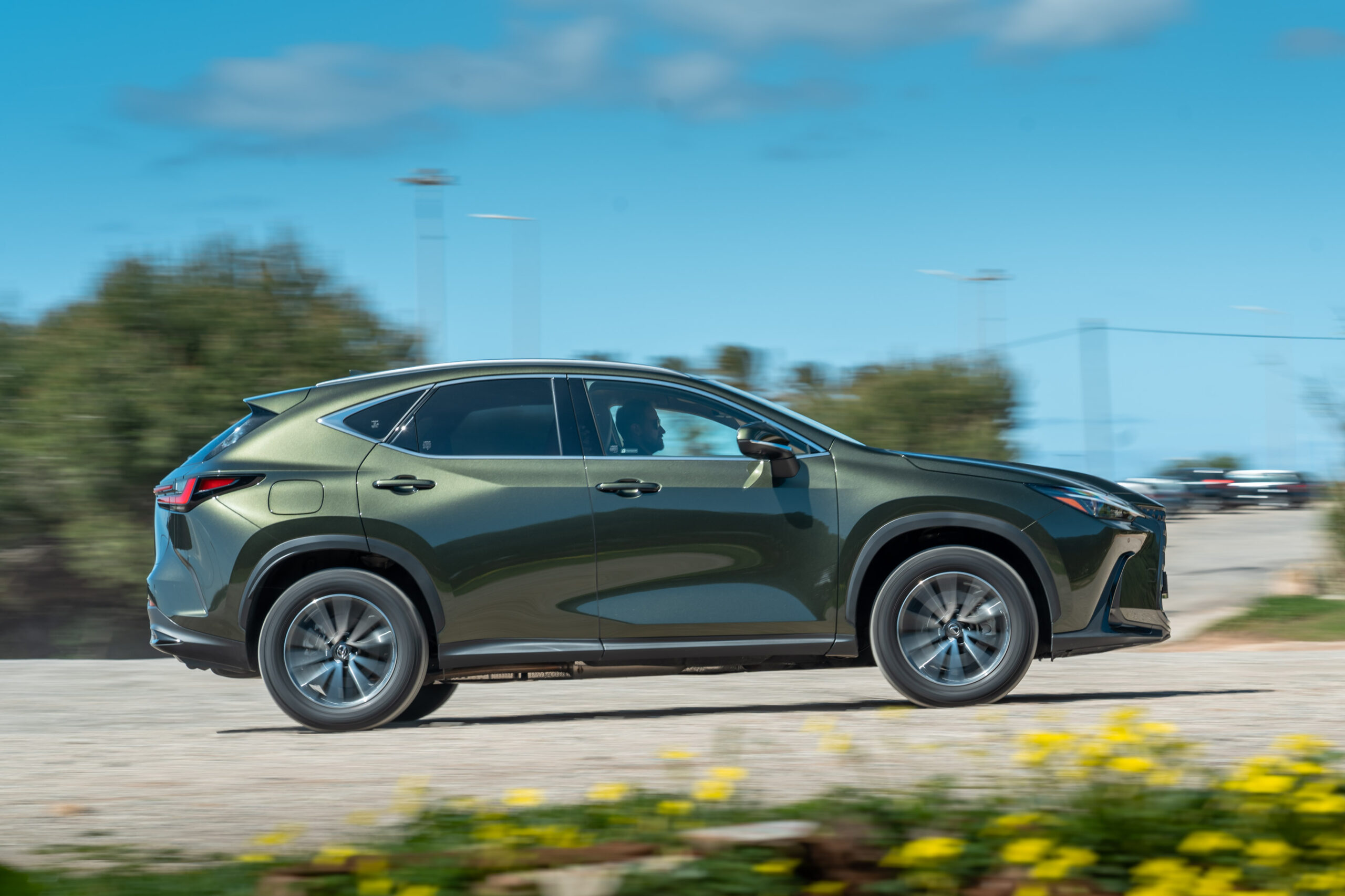 The general shapes of the NX have been kept, but the lines are more rounded. © Thom V. Esveld / Automotive Reason

But it always feels more comfortable on a long highway trip than on a more winding road, where we naturally want to take advantage of the 309 hp of maximum combined power that the hybrid system offers us.

And speaking of hybrid systems…

This is Lexus’ first plug-in hybrid and therefore comes with added responsibility. However, it equips a proven system, inherited from the “cousin” Toyota RAV4 PHEV. And that, as you might expect, is excellent news.

At the base of the system is a 2.5 l gasoline engine and four cylinders in line, which works according to the most efficient Atkinson cycle, delivering 185 hp, which is then combined with two electric motors.

Thanks to this, Lexus claims a maximum range in WLTP cycle of 76 km, a record that can be easily achieved if we adopt a more careful driving and if we mostly drive in the city.

And even when the battery runs out, we can easily make averages below 6.5 l/100 km, a very interesting record if we take into account that we are dealing with an SUV weighing about two tons and with all this mechanical «power».

Even so, on the highway, consumption soared beyond seven liters. And when I adopted sportier and faster driving, I even managed 7.8 l/100 km.

Here, the less positive note has to go to the on-board charger, which is limited to a maximum power of 6.6 kW (some plug-in hybrids already support 11 kW), so charging the battery fully takes approximately two and a half hours.

This Lexus NX 450h+ starts right away by convincing us for having a hybrid system that works very quietly and pleasantly. It is only when we call the gasoline engine more “urgent” that we hear it “scream”. 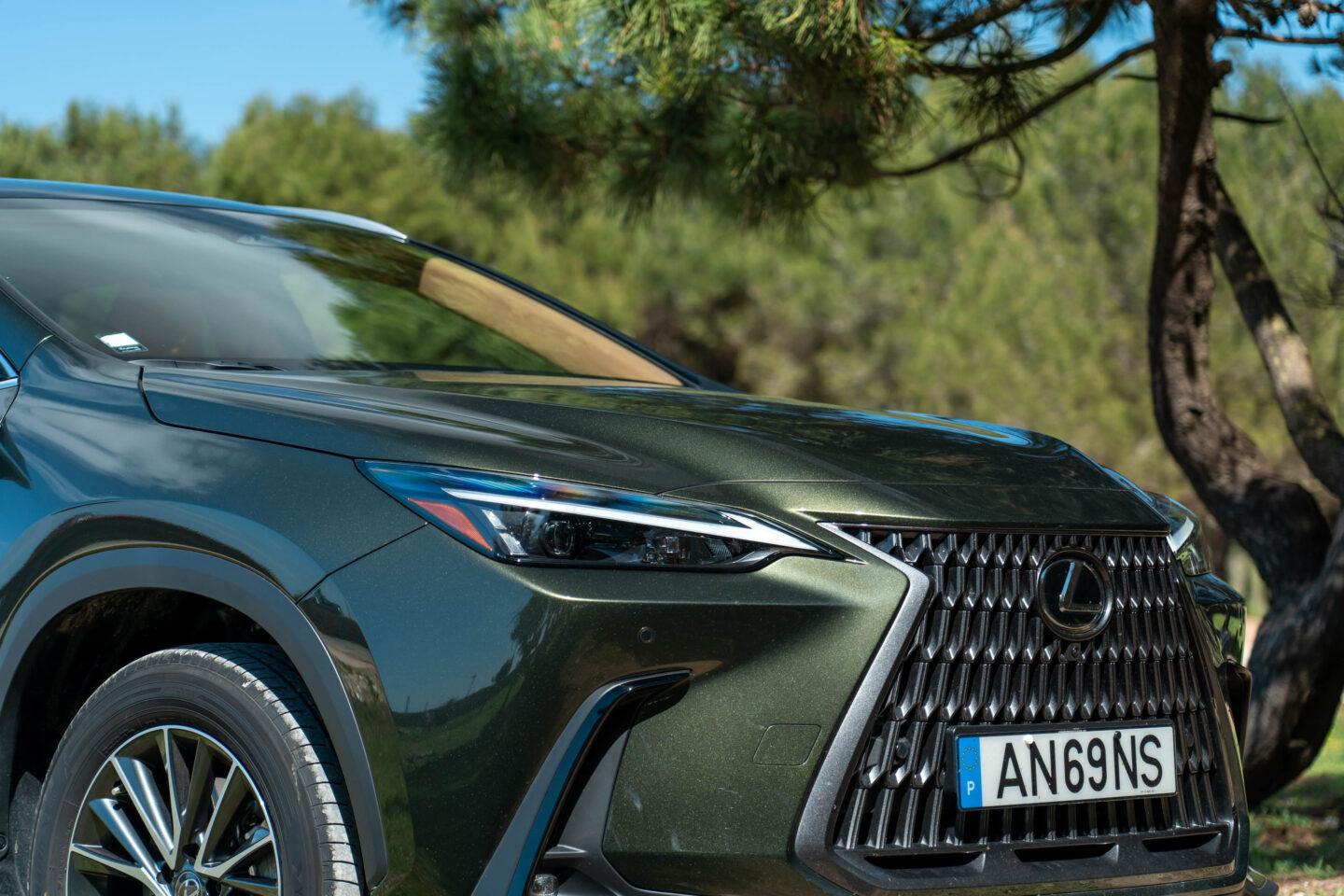 Then, thanks to the e-CVT transmission and the four different operating modes — EV (electric), HV (hybrid), Auto EV/HV and CHG Mode (charges battery with combustion engine) — we feel that the hybrid system generates always very well the kinematic chain and the energy at its disposal.

DON’T MISS IT: It’s official, the Toyota GR Supra will have a manual gearbox version

And to all this it is important to add, once again, the significant evolution that this NX has undergone in terms of interior, especially in terms of technology. The imposing 14” central screen and the new infotainment system work faster and, above all, more intuitive, one of the main negative criticisms leveled at the predecessor.

All in all, this Lexus NX 450h+ is an excellent proposition in global terms and has everything to succeed in Europe, maintaining the status of the best-selling model of the Japanese brand in Europe, perhaps even reinforcing this best-seller position.

As for the question I asked at the beginning of this article, well, the answer varies according to your loading possibility. If you can charge this 450h+ at home or at work, this is the version to choose.

If they are reliant on the public charger network, then it might be better to look to the conventional hybrid NX 350h, which is marginally more affordable.

It’s just that even offering nice consumption after the battery runs out, this NX 450h+, like any plug-in hybrid, only makes sense if it’s regularly charged. Otherwise, you will be constantly «dragging» a battery pack that offers you nothing.