We tested the Mazda CX-5 Homura. Is 184 hp diesel the right engine for this SUV?

About a year after Miguel Dias put it to the test with the Skyactiv-G gasoline engine, the Mazda CX-5 Homura returned to Razão Automóvel’s garage.

This time with the 184 hp 2.2 Skyactiv-D diesel engine (also available with 150 hp) which leads to the question: is this the engine that best “seats” the Japanese proposal?

After all, in the previous test, Miguel Dias mentioned that the set consisting of the 2.0 Skyactiv-G engine with 165 hp and the six-speed manual gearbox was something «short» for an SUV like the CX-5. Is this 2.2 Skyactiv-D a better option?

NOT TO BE MISSED: We tested the Volkswagen Tiguan 2.0 TDI Life with 122 hp. Is more needed? 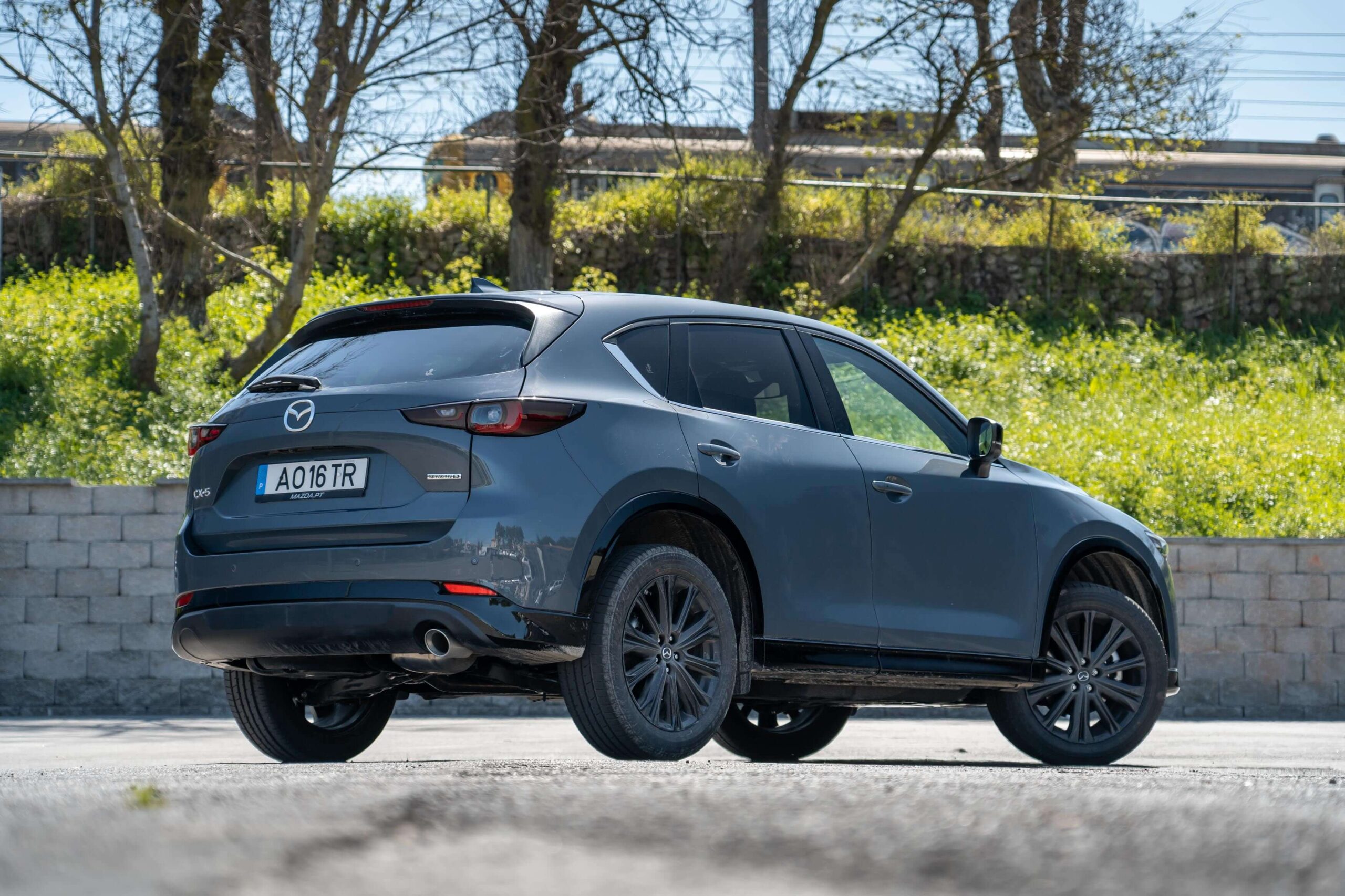 If there is one thing that helps the current Mazdas stand out, it is, without a doubt, the well-achieved color palette of the Japanese brand. © Thom V. Esveld / Automotive Reason

Before answering that question, it should be noted that, in the period of time that separates these two tests, the CX-5 was “refreshed”. In addition to differences in the exterior, both front and rear, the CX-5 has also been technologically reinforced.

The central screen now measures 10.25” (instead of 8”) and the infotainment system is also new. The screen reads well and the new system deserves praise for not offering too many menus that often end up not even being “visited”.

But it is in the overall quality of the cabin of its models that Mazda has evolved the most in recent years. The Mazda CX-5 Homura is no exception and I’m not exaggerating when I say that the distance between the Japanese offer and the premium offers is getting shorter and shorter in this chapter. 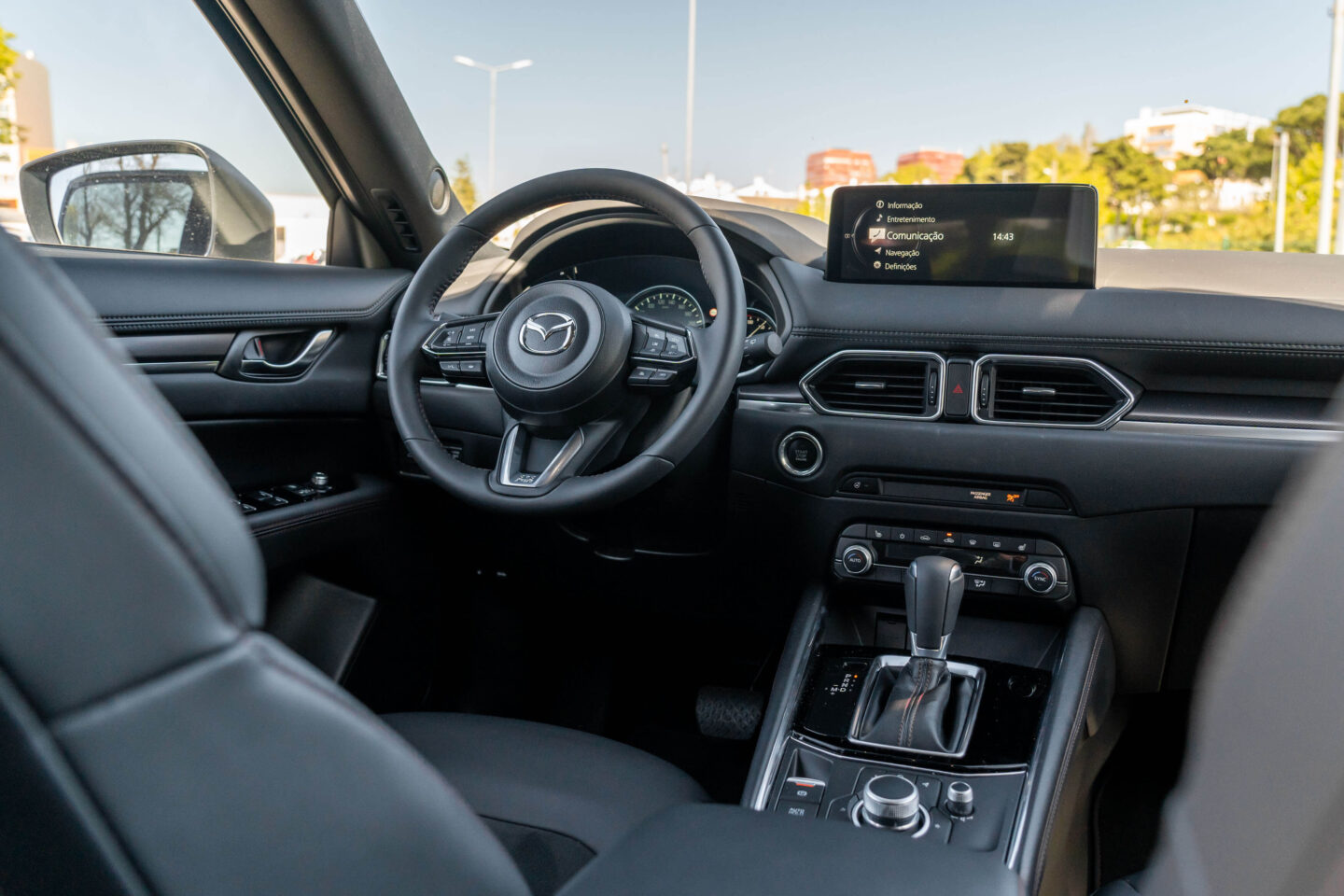 The robustness of the assembly and the pleasantness of the materials leave no doubt: Mazda is getting closer and closer to the premium proposals in this chapter.

As for space, I echo Miguel’s words. In the back space is plentiful and a family’s needs are more than taken care of. The luggage compartment with 510 l capacity and rubber mat is more than up to what the competition offers.

And is the engine worth it?

If we take the saying that first impressions count the most to heart, I can’t say that I was immediately impressed with the 2.2 Skyactiv-D.

When cold it turned out to be particularly noisy, but it improves as it reaches the ideal operating temperature without ever becoming, however, a benchmark in refinement, in clear contrast to the rest of the sound insulation work carried out by Mazda. 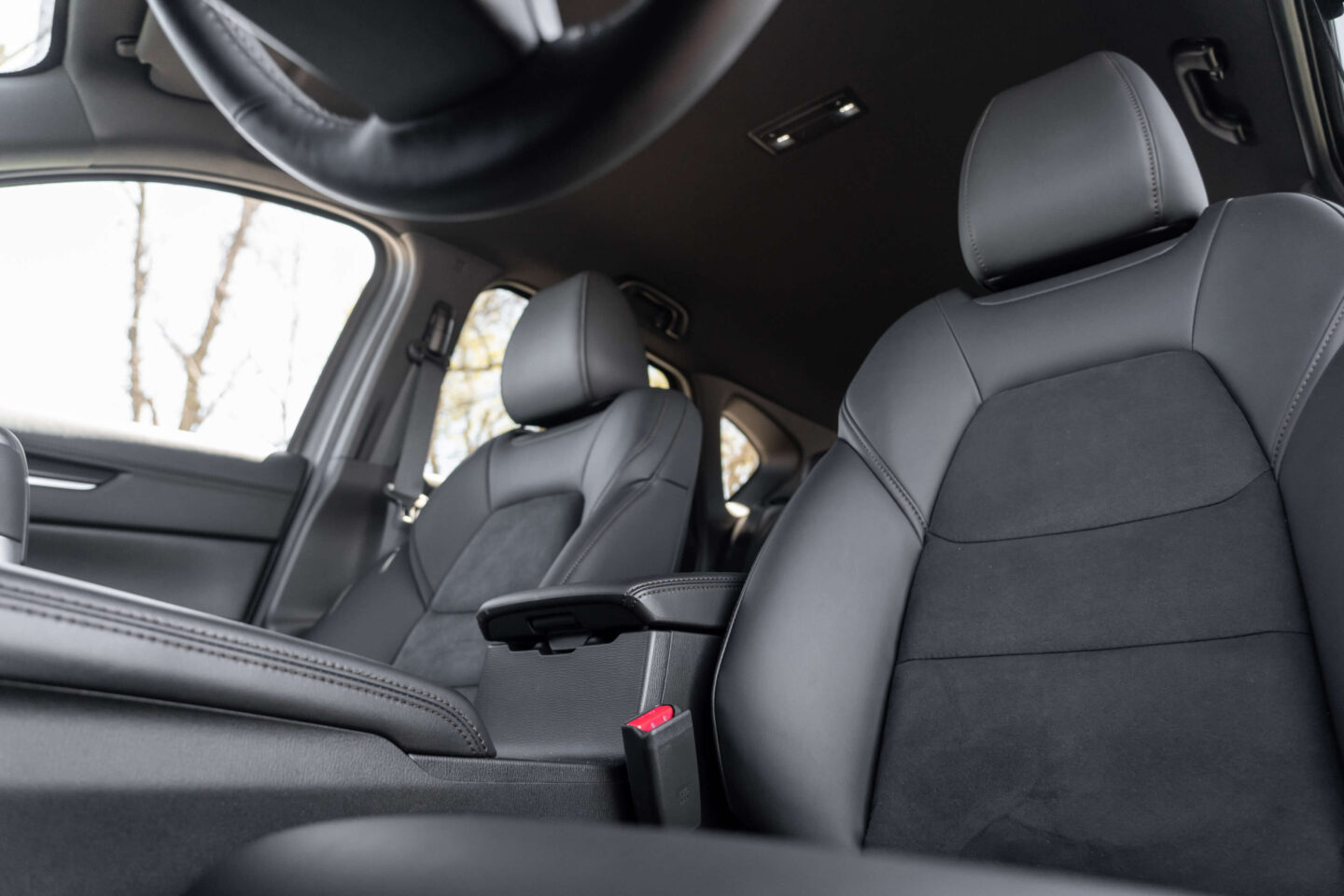 Although comfortable, the driver’s seat (electric and heated) has a somewhat short seat.

If the 2.2 l Diesel does not disappoint in terms of performance, it is also true that it never fails to impress. For example, on paper, the CX-5 Homura is faster than a Tarraco 2.0 TDI with 150 hp and DSG gearbox, but in practice the 34 hp more doesn’t make itself felt further there.

READ ALSO: We tested the Aiways U5. The first 100% Chinese electric in Portugal

The “blame” is, in part, of the six-speed automatic gearbox, which, despite being smooth in operation, did not prove to be particularly fast and, above all, presents a long step that “denounces” the CX-5’s preference for the highway and there, I have to admit, that’s where I appreciated it the most. 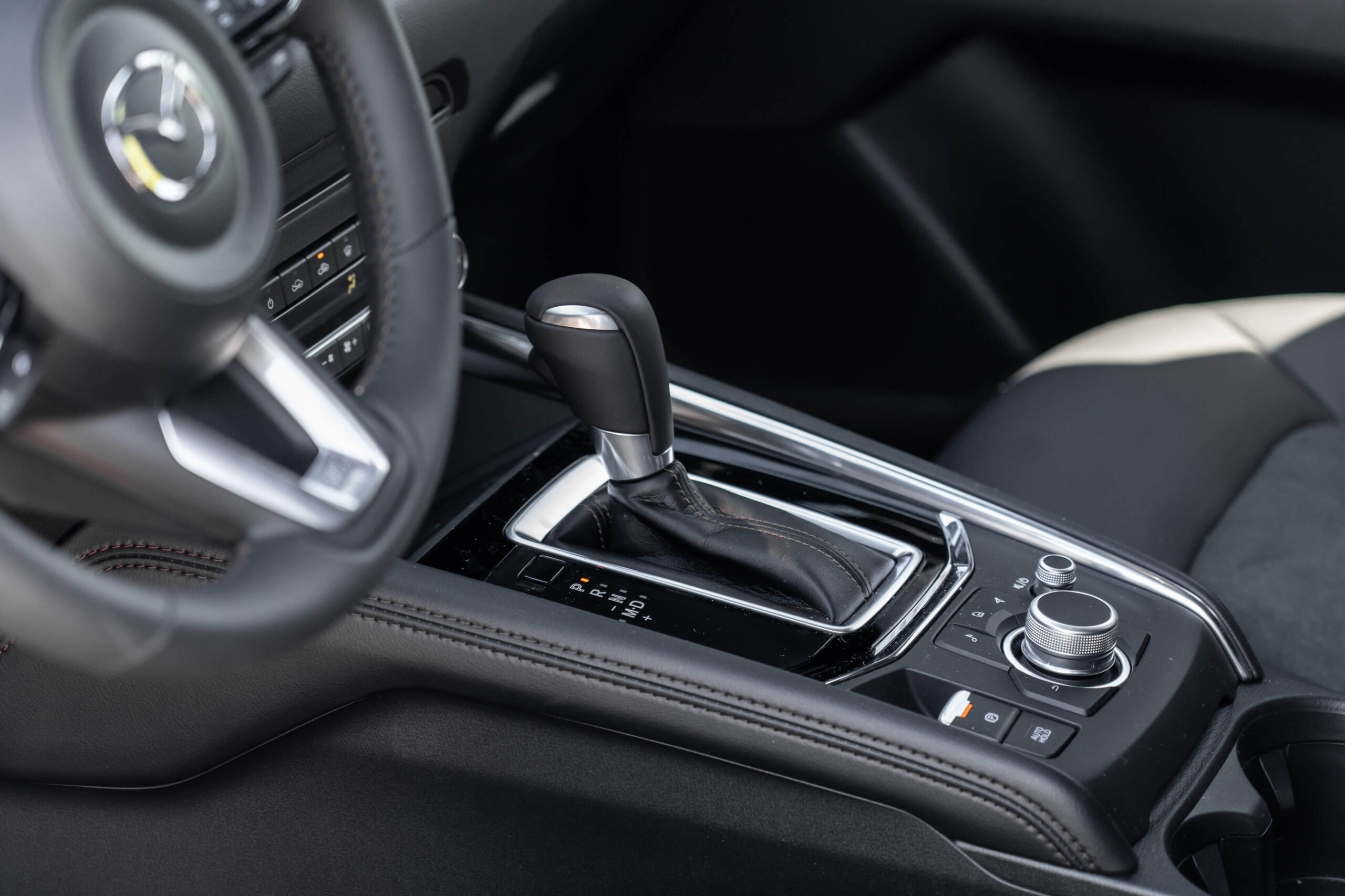 There, the long gearbox «forces» the engine to «sing softly», keeping the revs at the ideal speed, around 2000-2500 rpm, even when driving a little faster.

Furthermore, it is in these circumstances that the comfort on board the CX-5 Homura stands out the most, as well as its high stability.

When cornering arrives, the long gearbox ends up “betraying” the precise and direct steering and the well-tuned chassis. Always safe, predictable and stable, the CX-5 naturally doesn’t offer the same levels of fun behind the wheel as the Japanese brand’s smaller proposals, but it’s not far off.

Finally, in terms of consumption, the long box only helps if you drive a lot on the road and on the highway. There it allows us to reach averages of 5.8 l/100 km to 6.2 l/100 km without particular difficulty. 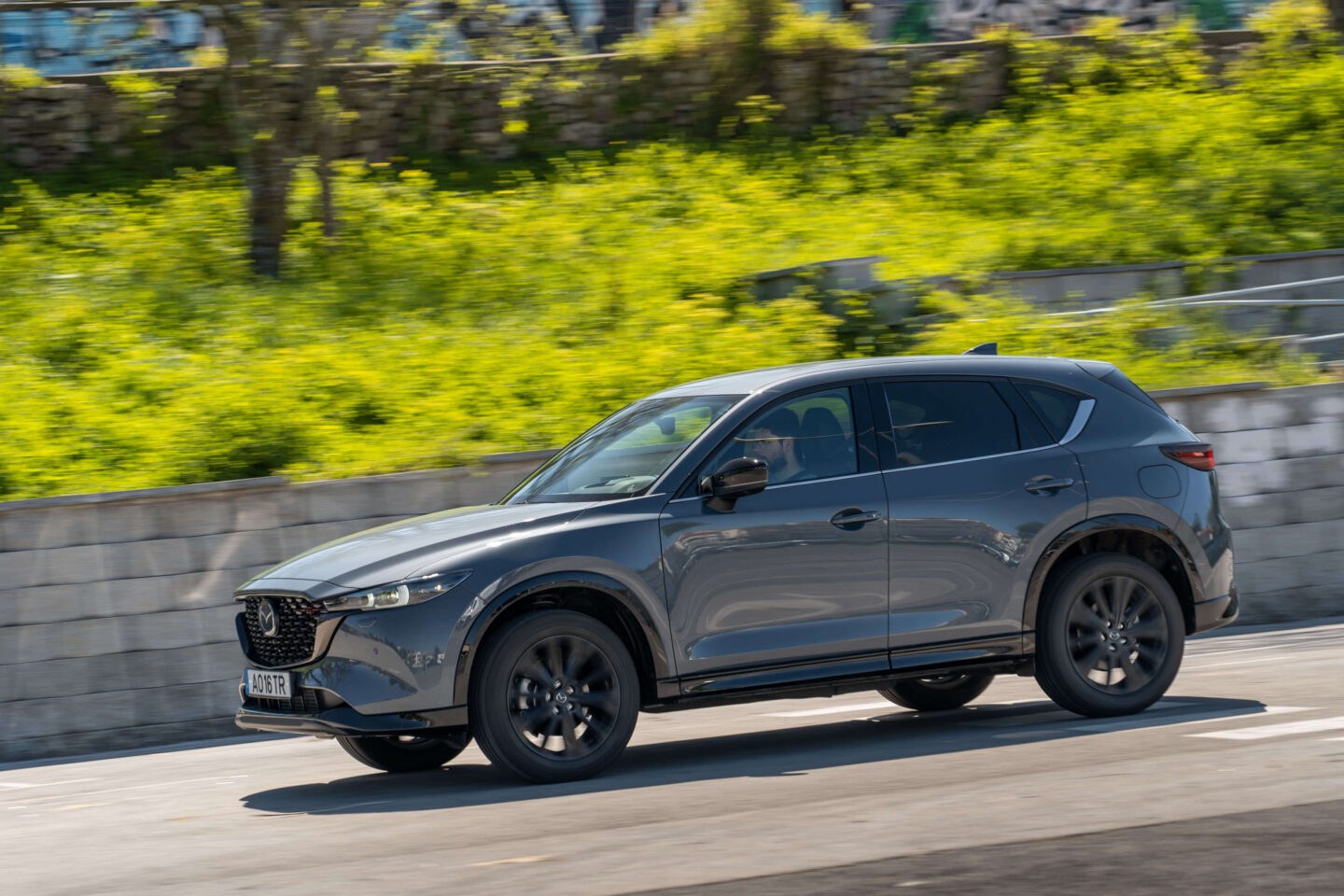 The behavior of the CX-5 Homura is guided, above all, by its rolling comfort.

In urban areas, however, we are often forced to resort to manual mode to “stimulate” the 2.2 l and this is reflected in consumption, which rarely goes below 6.5-7.0 l/100 km in these situations.

Is it the right car for me?

Sober and with an overall quality very close to that offered by the German references, the Mazda CX-5 continues to be an option to consider for those looking for a comfortable and spacious family SUV.

The CX-5 Homura presents itself with a more distinctive look, but, above all, with a good endowment of standard equipment, an area in which it definitely distances itself from the potential premium German rivals with which the proposals of the Hiroshima brand seem , increasingly able to compete. 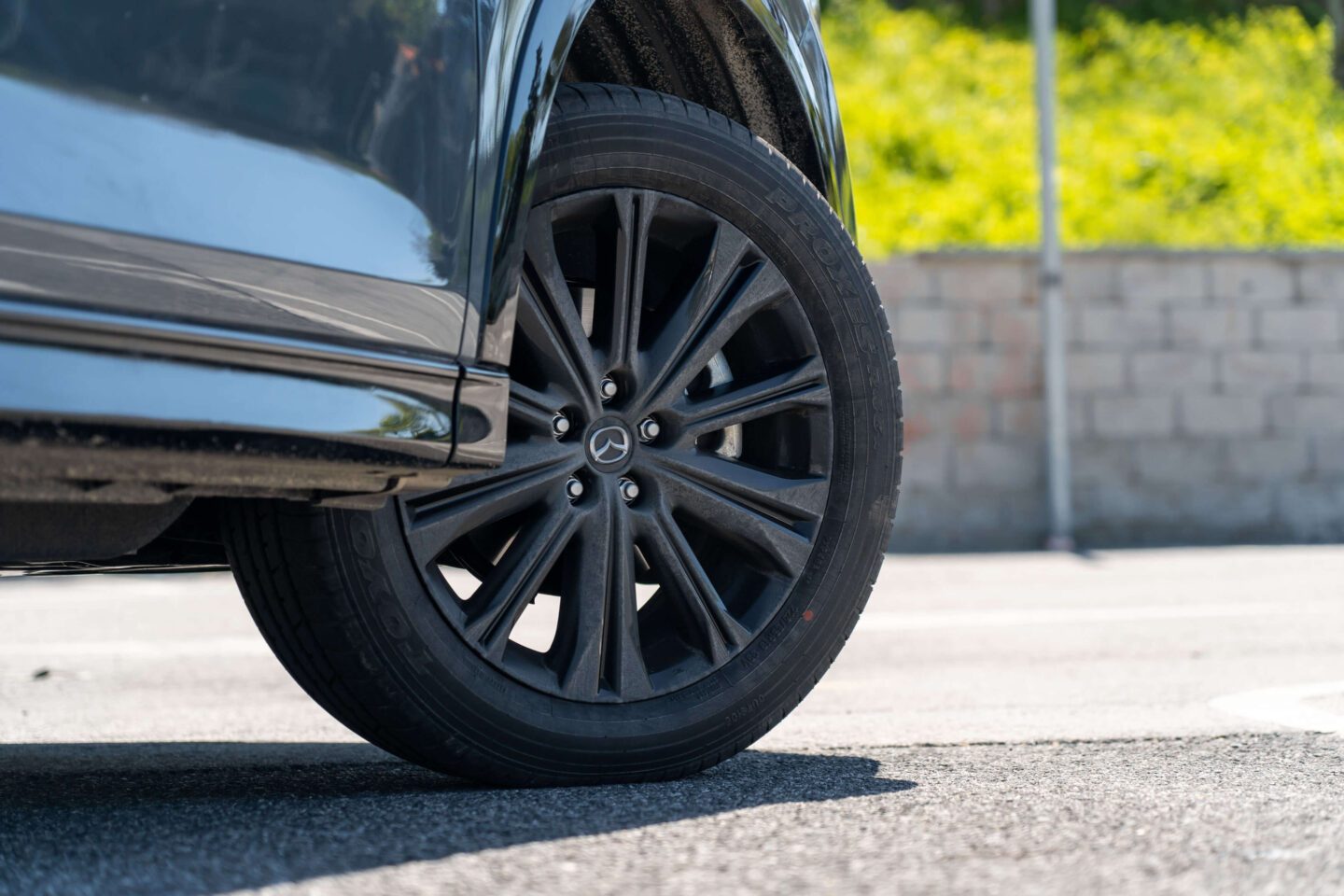 19” alloy wheels with a black finish are a unique feature of the CX-5 Homura.

As for the engine, despite being better suited to the familiar character of the CX-5 than its petrol counterpart, the truth is that even in this 184 hp and 445 Nm version it doesn’t impress with its performance.

On the contrary, it “fits like a glove” to the more relaxed and familiar character of this SUV, proving to be a good ally on long journeys, especially on the highway, the “natural habitat” of the CX-5 Homura.

Kupfer: It’s the first time a president has opposed himself

ICMS zeroing may cause migration of ethanol to fossil fuel, says Anfavea