Stoffel Vandoorne (Mercedes) was the big winner of the Monaco E-Prix. The Mercedes driver did very well and also had some luck on his side. But the Belgian’s merit is not in question, he had an excellent performance. Mitch Evans (Jaguar) was runner-up and the Jaguar driver was still in trouble during the race, struggling to manage his energy well. He failed to capitalize on pole, but he managed to get a good result. Closing the podium Jean-Éric Vergne (DS Techeetah) who once again showed good arguments in a race where he could have been a candidate for victory if a Full Course Yellow had not interfered with his journey. António Félix da Costa (DS Techeetah) was fifth, having started from 10th, in an excellent recovery. The Portuguese does well on the streets of the principality and proved his talent again, even though he started from the middle of the pack.

The start went smoothly and the top 5 saw no change in positions, with Evans maintaining the lead, followed by Pascal Wehrlein (Porsche), Vergne, Vandoorne and Lucas Di Grassi (Venturi). Félix da Costa did not have a good first lap and dropped to 12th place. The fight for 10th place heated up with the men of Avalanche Andretti fighting each other. Jake Dennis remained ahead of Oliver Askew, with Félix da Costa just behind this duo. On the third lap, the Portuguese driver recovered and climbed to 10th.

After the first three laps, the drivers established their rhythm and the usual calm of the first race starts in Formula E was installed on the track. Félix da Costa was one of the first riders to pass through the Attack Mode (AM) activation zone in the first of two four-minute activations. For Sam Bird (Jaguar) the race got worse and the Briton appeared at a slow pace falling to the end of the pack (he would eventually give up) while his teammate led, without problems.

At the same time that the drivers fighting for the top 10 went to the AM, Wehrlein attacked Evans, with the Jaguar driver managing to defend himself. Félix da Costa was gaining places, helped by AM and was eighth with just under 30 minutes to go. The fights in the middle of the pack were intense, but Félix da Costa was able to withstand the attacks of the pilots who had gone to the AM later. Dennis could not avoid a touch on the back of the Portuguese, who held the car and did not lose control.

Evans went to AM handing over the lead to Wehrlein, followed by Vergne and Evans. When Wehrlein went to AM, Vergne took the lead in the race, with Evans struggling to match his competitors’ efficiency. Wehrlein returned to the race lead with the extra speed of the AM. Evans dropped to fourth, having been passed by Vandoorne and the race got worse with each lap for the pole sitter.

The drama came with 20 minutes to go with Wehrlein falling down the rankings with problems in his single-seater. Vergne returned to the front of the pack, with Vandoorne, Evans, Di Grassi and Lotterer in the top 5. Vergne went back to AM and Vandoorne took the lead, at which point the Full Course Yellow was triggered. The losers were Vergne and Di Grassi who went to AM before FCY losing the extra power advantage. Félix da Costa remained in ninth place.

At the end of the FCY, Vandoorne had a big advantage over Evans and was in a prime position. However, Bruno Correia’s Safety Car was called into service after the duel between Oliver Rowland (Mahindra) and André Lotterer (Porsche) ended with both stopped on the track. Vandoorne had just gone to AM and was also losing, as had happened to Vergne and the scores seemed to even out. The race was ruined within minutes for Porsche with two cars out in less than five minutes. The Safety Car didn’t stay on the track for long, thanks to the efficiency of the Monaco stewards.

Vandoorne restarted the race at the front, pressured by Evans, with Vergne close behind. Di Grassi, Frijns and Félix da Costa completed the top 6, in a good recovery for the Portuguese. But the one who stood out was the inevitable Frijns who took advantage of his AM to gain advantage and with Evans passing for the second time in the AM, the Dutchman was in third position, behind Vergne and leader Vandoorne. Evans regained third place thanks to AM and started attacking Vergne. Félix da Costa was already fifth, having passed Di Grassi. Up ahead, Evans was back in second place after passing Vergne.

After the entry of the Safety Car, the race would have another 4 minutes and 30, which brought some more concerns in terms of efficiency. Vandoorne had a good advantage over the rest of the competition and looked to have a hand in the coveted trophy. The most intense fight was for third place with Vergne defending himself from Frijns and Félix da Costa, but there were no changes in the order

The chess flag was shown and Vandoorne stamped the victory, followed by Evans and Vergne completing the top 3. Robin Frijns and Félix da Costa completed the top 5, with the Portuguese being the rider who recovered the most positions in this race, one of the afternoon stars. 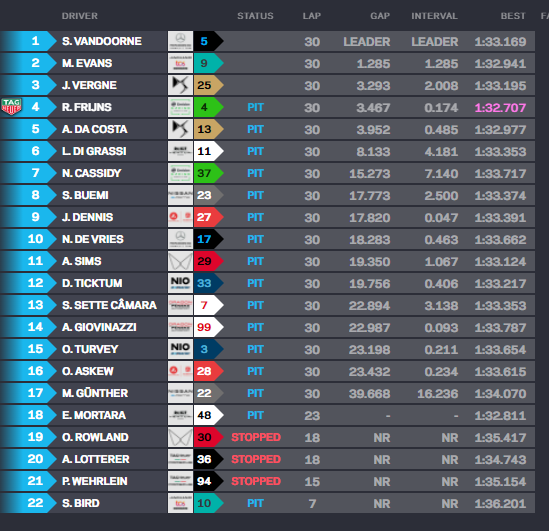 Electric GTI for the family. What is the new VW ID.5 GTX worth?

Opinion: How much do R$10,000 earn in the 7 safest investments in the country?