With soybean oil at R$25, a customer uses lard; why did it go up so much?

The price of soy oil soared this year, and a bottle can be found for up to R$24.62 on supermarket websites. In physical stores, some units have made promotions, but limiting the amount of bottles that each consumer can take.

In a Bompreço market, in Recife (PE), the oil was at R$ 11.99, in the promotion, with a limit of up to five units per customer. Consumers look for options and even use lard instead. Why has the price soared? See expert reviews below. 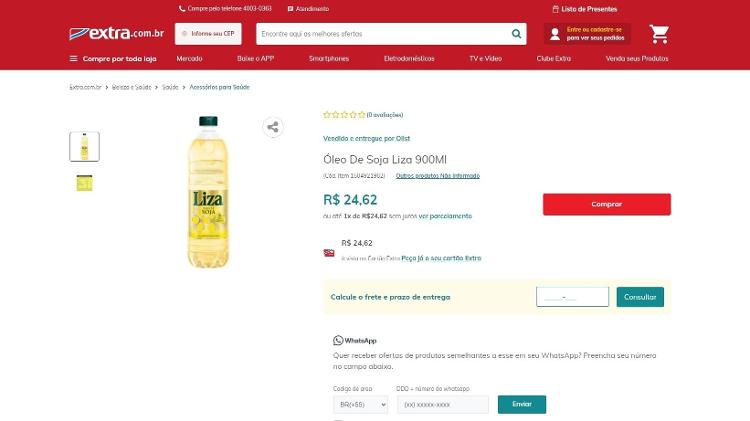 According to data from the IPCA (Ample National Consumer Price Index) for March, an IBGE (Brazilian Institute of Geography and Statistics) index that measures the country’s inflation, the price of soybean oil rose 8.99% in March and 11.21% in the first quarter of this year. In the last 12 months, the high is 23.75%.

Consumer changes oil to save

The orientation of Apas is that the consumer try to change the brand to save. If the price still weighs on your pocket, another option is to replace soybean oil with another product.

On social media, the most talked about exchange is soy oil for lard — because it is cheaper and lasts longer.

Soybean oil is known to be one of the cheapest options for cooking, so substitutions are more limited.

I already switched, Neila.
I’m not realizing it, it’s all costing a kidney. Even lard is expensive, but it’s even more affordable.

Why has the price of soybean oil soared?

Rising oil prices and reduced sunflower oil production in Ukraine are some of the factors that are increasing demand for soybean oil and putting pressure on prices.

When the price of oil rises, the demand for biofuels increases, which are fuels that use soybean oil in their composition.

The reduction in the soybean crop caused by the drought also influenced the increase in prices. Gabriel Castagnino Viana, a specialist in soybean oil at the consultancy Safra e Mercado, says that the expectation was that 145 million tons would be produced, but the number should be between 125 million and 130 million.

On Thursday (28), Indonesia, which is one of the largest palm oil producers in the world, banned exports of the product, and the decision could destabilize the vegetable oil market, which was already sensitive with the war between Russia. and Ukraine.

“Indonesia exports more refined oil than crude, so this impacts global supply. Palm oil is the main substitute for soybean oil. This reduction in the global supply of vegetable oil at the same time that the world has a supply problem of oil ends up turning into a perfect storm”, says Viana.

Prices are expected to remain high at least until the second half of this year, with the arrival of a new soybean crop from the United States.

“If the price of soybeans falls consistently, soybean oil should also fall. These are values ​​that have a fast transmission, because the oil is the crushed soybean itself”, says André Braz, coordinator of the IPC (Consumer Price Index). ) from Ibre/FGV (Brazilian Institute of Economics, Fundação Getulio Vargas).

Will you run out of soy oil?

The experts heard by the UOL consider it unlikely that there is a shortage of soybean oil. Abiove (Brazilian Association of Vegetable Oil Industries) says that the Brazilian industry is making an effort to guarantee the supply of the domestic and international market and that soy processing grew in the first two months of this year.

“The production of soybean meal and oil also followed this growth. Thus, the industry continues to increase production. Despite the guarantee of supply of soybean oil in the Brazilian market, prices will be pressured while the external scenario is not balanced”, stated in a note.

Diego Pereira, economist at Apas (Paulista Association of Supermarkets), agrees that the risk of lack of oils in the markets is minimal.

Apas says that there is no guideline that guides markets to limit the number of bottles sold and says that supermarkets can take the measures they deem most appropriate.

“The producer is seeing that the profitability of soybean oil is greater than that of grain and bran and, therefore, has bet more on soybean crushing”, says Pereira.

Where to invest R$ 100 thousand with less risk to redeem in the medium term?

On newsstands. June TURBO now on sale with high adrenaline