MIT (Massachusetts Institute of Technology) released a somewhat intriguing audio: the representation of a black hole devouring an orbiting star. To create the sound, X-ray echoes of light were used, which are emitted when the black hole pulls gas and dust from the star. The 13-second video sparks curiosity about how mysterious celestial bodies act.

The study published in the Astrophysical Journal, and released on the Institute’s official website last Monday (2), brings yet another advance in knowledge about these phenomena. And these findings could help unravel how supermassive black holes can shape the formation of entire galaxies by ejecting cosmic particles. 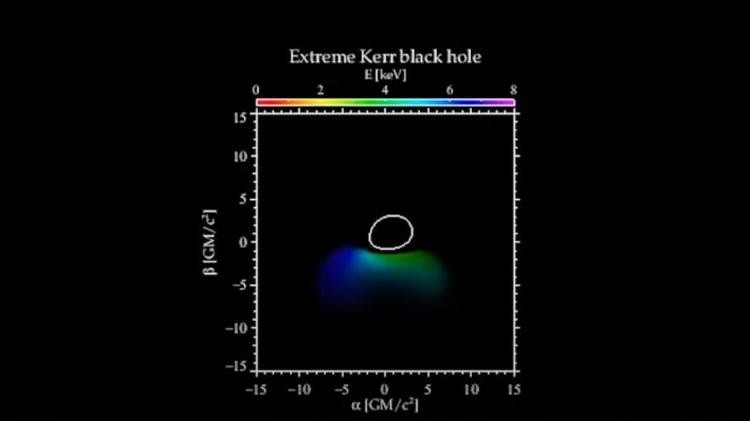 Echoes of a black hole sounded in MIT video

This type of celestial body is known to function as an immensely strong gravitational well of space-time. Anyone who watched the movie Interstellar, an aerospace-themed feature film released in 2014, has a cinematic view of the gleaming Gargantua, the film’s black hole. But, according to MIT, these celestial bodies are essentially dark.

And their extreme surroundings are illuminated only when they swallow a star. This is when the black hole pulls gas and dust from the orbiting star and can emit intense bursts of X-ray light.

How is sound possible?

The project brings people closer to these curious cosmic movements and makes it possible to hear what would be the “sound of a black hole”. Of course, from light years away, the sound was not directly picked up. It’s a simulation that uses that same X-ray echo, caused by swallowing a star, converted into audible sound waves.

The initiative is led by Erin Kara — co-author of the paper and a professor at MIT — in conjunction with MIT education and music scholars Kyle Keane and Ian Condry.

You are curious? So it’s worth listening to:

To understand the movements shown in the video, know that the central white circle indicates the location of the black hole’s event horizon. Light echoes are color-coded at their observed frequency.

Tracking how the black hole evolves as it devours other stars is a challenge. And the way the scientists found it was to be inspired by bats. Mainly in the peculiar way they communicate.

When a member of the pack emits a call, that sound can bounce off obstacles, reaching the other bat in an echo format. The time it takes for the echo to arrive depends on the distance between the two bats. And this is important because it allows the animal to have a clearer mental map of its surroundings.

And in the same way that echoes are emitted by bats, Kara and her team of scientists are using X-ray echoes to map the vicinity of a black hole.

To do this, MIT touted the use of a new piece of equipment called the “Reverberation Machine”. It works to look for black hole echoes in satellite data.

“Understanding the explosions in these small nearby systems, we can understand how similar explosions in supermassive black holes affect the galaxies in which they reside,” explains Kara.

By using the machine to compare the echoes, the team was able to form a picture of how a black hole evolves during an explosion. And the step by step is basically the following.

First, the celestial body would go through a “hard” state. In this step, a corona of photons – a region of high-energy plasma – together with a jet of relativistic particles, is launched at close to the speed of light.

Then, at a certain point in its existence, the black hole emits a final high-energy flash. This happens before switching to a low-energy “smooth” state. It could be a sign that the celestial body’s corona has expanded, ejecting a final burst of high-energy particles before disappearing completely.

The time a telescope receives light from the corona, compared to when it receives X-ray echoes, gives an estimate of the distance between the corona and the accretion disk – a structure formed by orbiting materials from the central body. And from there, analyzing how those delays change can reveal how a black hole evolves as it consumes stellar material.

Regulatory framework for cryptocurrencies: after all, what changes for investors?