Twin mannequins will go to space before 1st woman lands on the Moon; understand

Two twin mannequins designed to represent female bodies will be sent on the first test flight of NASA’s Artemis I mission, which aims in the future to take the first woman to the moon.

The “fake” astronauts, named Helga and Zohar, will be aboard the Orion spacecraft on its first unmanned spaceflight. Outside of Earth, the structures will collect data to help scientists measure how cosmic radiation might affect women in space.

The mannequins were designed through the MARE experiment, by researchers at the DLR (Deutsches Zentrum für Luft- und Raumfahrt) Institute for Aerospace Medicine in Cologne, Germany.

The Orion capsule will orbit the Moon and then return to Earth. The unmanned flight is scheduled to take off in August this year.

How are the mannequins?

Helga and Zohar are 95 cm tall and weigh 36 kg. They were made with materials that mimic human bones, soft tissue and organs of an adult woman.

More than 10,000 passive sensors and 34 active radiation detectors, integrated into 38 discs, make up the female figures.

The structures have already been delivered to the Kennedy Space Center and are expected to be assembled and installed inside the capsule four weeks before launch.

Why do they represent women?

The radiation to which the human body is exposed is significantly greater outside of Earth’s protective magnetic field, which becomes one of the biggest challenges for longer missions in deeper space, such as those that will go to Mars in the future.

Human beings exposed to large amounts of radiation can have acute and chronic health problems, ranging from immediate illness by its impact to the development of cancer in the future.

NASA chose the female dummy because women’s bodies are more sensitive to radiation than men’s, especially in organs like the breasts. Therefore, a safe space for women will also be for men. 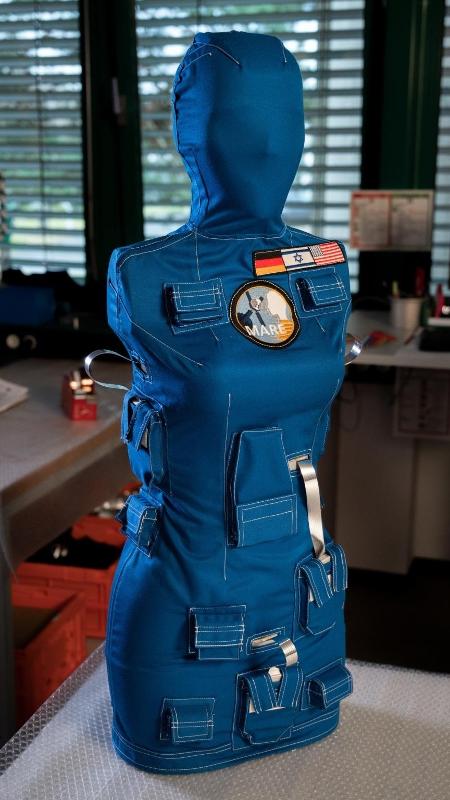 The measuring dummies Helga and Zohar will sit inside the Orion capsule, but each has different purposes.

While Helga will fly unprotected to the Moon, Zohar will wear a radiation protection vest, called AstroRad, developed by the Israeli Space Agency (ISA), an Israeli industry partner StemRad, which also makes up the MARE experiment.

The vest will be undergoing tests along the journey. By comparing the two sets of data, it will be possible to determine to what extent the technology developed could protect an astronaut from radioactive exposure.

The spacecraft will orbit the Moon and return to Earth in 26 to 42 days, traveling about 240,000 miles to lunar orbit. The capsule will be powered and supplied by the European Service Module (ESM), which was built largely in Bremen, Germany, using German technology.

This means that the two dummies have to function independently of the spacecraft. From power supply to data storage, all functions need to be independent of Orion itself.

The dolls have a three-centimeter grid built into their entire torso that will allow scientists to map internal doses of radiation to areas of the body that contain critical organs.

With two identical torsos, scientists will be able to determine a new vest’s ability to shield the crew from solar radiation, while also collecting data on the amount of radiation astronauts may experience inside a capsule at different times of the year. flight.

Better understanding the risks of radiation

The Earth’s atmosphere and the shielding effect of its magnetic field protect beings from most radiation in the Universe, including solar. When astronauts leave Earth, they are exposed to the full spectrum of radiation found in space.

The Orion spacecraft will experience two periods of intense radiation as it flies through the van Allen Belt, the aura that surrounds Earth and harbors charged particles trapped by the planet’s magnetic field. This will happen for the first few hours after launch, and then on return.

Outside of that Belt, solar radiation also impacts the journey away from Earth. This radiation includes energetic particles produced by the Sun, as well as galactic and extragalactic cosmic ray particles that originate from outside the Solar System.

Cosmic rays are an added challenge for long missions in open space, because they provide a continuous level of high-energy ionized particles, ranging from hydrogen to iron to uranium. The exposure can be up to 700 times greater than that found on Earth.

NASA’s new lunar program was called Artemis, an allusion to the Apollo missions. In Greek mythology, Artemis is the goddess of the Moon and the twin sister of Apollo.

The first woman is expected to go to the moon on the program’s third flight, scheduled to take place by 2024.

Rather, the Artemis II mission is scheduled to launch with an all-male crew in 2023. The program on the Moon will pave the way for human exploration of Mars.

*With information from New Scientist and DLR.

The Gross Domestic Product (GDP) of the United States suffered an annualized contraction of 1.6% in the first quarter of this year, according to the third and final...

Stellantis continues to bet on the new sub-segment of crossover saloons and, after the Citroën C5 X and the Peugeot 408, it has revealed another proposal for this...

Senator Fernando Bezerra Coelho (MDB-PE) presented this Tuesday (27) details of his report for PEC (Proposed Amendment to the Constitution) nº 16, which increases benefits and creates new...