‘Alexa, call so and so’: Amazon headphones go beyond music

“Alexa, turn up the volume”, “Alexa, next song”. Commands like this are common for anyone using an Amazon speaker. But this kind of order has been a part of my daily life for the past three weeks using a much smaller and discreet device: the Echo Buds headphones, which the company launched in February.

In addition to responding to voice commands, the headphones have active noise cancellation and good sound quality. This set makes the product an interesting option for those who want practicality and no wires. They start at BRL 854 (version with wired charging case, on sight). Check out more details of the review below. Tilt of today.

Despite being new here, this is already the second generation of the gadget, launched in the United States more than a year ago. The first model, which never reached the Brazilian market, dates from 2019. This year’s model gained a minimalist design, in the “ball” style, like Samsung’s Galaxy Buds Pro. But the finish, all in black plastic, is very basic and straight to the point, without the different colors and textures of the competitor.

The case is portable (40% smaller than the first generation), with a pairing button and a USB-C port for charging. Two internal and one external LEDs indicate the battery status of the headphones and case, respectively.

In addition to music player

Without taking your cell phone out of your pocket, you can control music playback with Echo Buds just using voice commands. You can also listen to podcasts, news and even digital books from the Kindle reader, also from Amazon, in addition to making calls to your contacts. Example: “Alexa, call So-and-so”.

Create reminders and shopping lists by “talking” to your phone. Check your calendar. Control smart home devices — turn lights on and off, open locks, etc.

Another interesting feature is the ability to send voice announcements or make audio calls to an Echo speaker —yours or your friends and family members—, as is already possible using your smartphone.

Echo Buds are very comfortable to wear, without being uncomfortable or hurting. A ventilation system, similar to Apple’s AirPods Pro or Galaxy Buds, helps reduce in-ear pressure and the “sucking” feeling that some people experience.

For a better fit in the ear canal, they come with three pairs of extra ear tips, totaling four different sizes, identified by color. An in-app guide helps you select the best one for you, running a test to confirm that the seal is adequate: Alexa plays some sounds and measures how much of them has leaked out, using the microphones themselves. A good seal means better sound quality, especially bass, and less chance of the headphones falling out.

In addition, six “wings” are included: frames with wider edges, which can be placed to prevent the headset from falling over in high-traffic situations, such as exercise. With this type of activity in mind, the device is also IPX4 certified, resistant to water splashes, sweat and light rain. Bluetooth connection is stable; in our tests, it was possible to get up to about 8 meters away from the cell phone, without losing contact. And they work very well on both iPhones and Androids.

For this, in addition to the correct physical fit in the ear, the most modern headphones use Active Noise Control (ANC) technologies. Amazon headphones have this feature, developed by the company itself.

Two external microphones and an internal microphone calculate the sound pressure on the eardrum to generate the inverse of the signal and cancel out unwanted sounds. To activate, press and hold any of the earphones or say “Alexa, activate noise cancellation”.

It will be efficient for most people, but for those who like “shielded” headphones, which don’t let any external noise through, this headphone may not be the best option.

Canceling is more natural, blocking out most everyday sounds like a television on or people talking. However, you still hear some louder noises, such as horns, trucks passing by, or very loud background music.

Commands can be given by voice, via Alexa, or directly on the phone, by touch:

Controls are the same on either side. The side effect is that this limits the amount of functions per touch — for example, there is no easy volume control.

In our experience, as with AirPods, the best option to control the volume is to use the voice command, the side buttons of the smartphone or even the adjustment bar of the streaming app (such as Amazon Music, Spotify and Apple Music) that you are using. using. 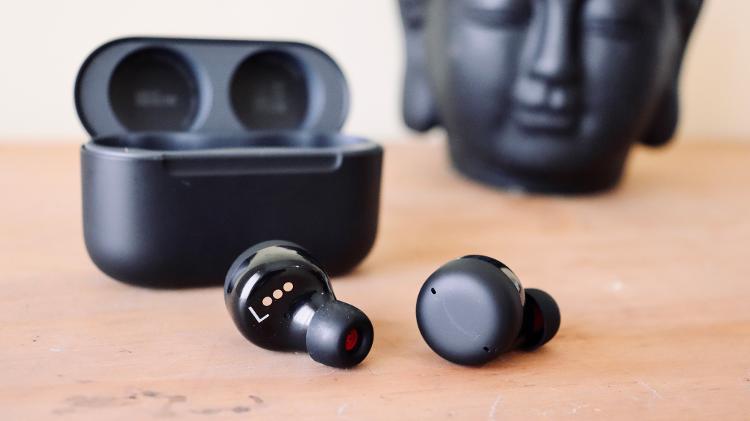 According to Amazon, the 5.7mm dynamic drivers are “optimized to increase bass and treble fidelity”, with an “open” sound profile. They provide clear listening to spoken content such as podcasts, digital books, and narrated videos.

What most people are interested in, the songs, the performance is very good. The company appears to have developed the Echo Buds standard with more modern songs in mind. Listening to Dua Lipa, Machine Gun Kelly, Lil Nas X and other international pop and rap artists are good demonstrations of the phone’s potential.

It manages to avoid the strident highs, and enhance the sub-bass. For my taste, which I usually listen to more rock, it lacked a little depth in the sound — still, the basses are more powerful than those of the AirPods Pro.

Since the app offers a basic equalizer —which is an interesting feature, which headphones don’t usually have—, I increased the bass by about 30% and lowered the treble by about 20%. And I keep the volume at about 60%. So, yes, I fell in love with the Echo Buds.

According to the manufacturer, the battery of the headphones themselves guarantees five hours of music playback, with the ANC on, or up to six and a half hours with the technology turned off. In our tests, the autonomy really was around the promised.

The case can offer up to two more full charges for the headphones, tripling the use time without needing to recharge, totaling about 15 hours.

In an era of home office and online meetings, microphones are also important. In tests, I was always heard loud and clear, despite some distortion (common to all true wireless headphones).

In the app, it is possible to activate the “sidetone” function, which allows you to listen in real time, and with adjustable volume, your own voice captured by the microphone – some people find it useful.

Echo Buds are equipped with location services. If you lose them, just say “Alexa, find my headphones” to the smartphone app or another of your Alexa-powered devices, like an Echo box. It will tell you the last location and, if they are nearby and outside the case, they will emit a high-pitched audible alert for them to be found.

For those who don’t have a smartwatch, the Echo Buds can be used to count steps and track runs, in the “workout profile” function.

Regarding privacy, Amazon says in its release statement that the headphones are designed with “multiple layers of protection and controls,” including the ability to mute microphones with the Alexa app, and to view and delete your voice recordings.

The headphones arrived in Brazil with the price a little above the most direct competitors, such as the Galaxy Buds, from Samsung, Air Dots, from Xiaomi, and FreeBuds, from Huawei. However, none of them have such direct integration with Alexa. There are other models that let you access it, but only after pressing a button before ordering something.

Another advantage is that it is cheaper than other premium headphones, such as Apple’s Air Pods.

On the Amazon website, the Echo Buds are available in two versions in black:

Good value for money for the features offered. For those who like to use voice commands and smart home devices, the Echo Buds are certainly one of the best options.

WRC, Jari-Matti Latvala: “it will be very interesting to see the level of the different teams and cars”