What’s inside the pyramids of Egypt? Cosmic rays can reveal

One of the great mysteries of humanity is the Pyramids of Giza, Egypt. How were they built and aligned? What exactly is inside them? What other secrets do they keep? Scientists are seeking funding to develop a system of super-powerful telescopes to map the largest and oldest of them, Cheops.

The idea is to scan the entire structure, using energetic particles from space, to create a map. They would walk through the pyramid and help us “see” it from the inside, from all angles, revealing new details of the mysterious inner chambers.

Known as the “Great Pyramid”, the work is about 140 meters high and 230 meters long on each side of the base. It would have been built as a tomb for the pharaoh Cheops (or Khufu), during the 4th dynasty of Egypt, around 2560 BC It is the only one of the Seven Wonders of the Ancient World that still stands.

Khafra and Menkaure complete the trio of pyramids at Giza, which are oriented to each of the cardinal points (north, south, east, west), with a small margin of error of less than one degree.

What is the technology?

The new system would be larger and more advanced and would have “more than a hundred times the sensitivity” of the instrument previously used to study the archaeological site, said project leader Alan Bross, a scientist at Fermilab in the United States.

He would use so-called “muons”: high-energy, negatively charged, electron-like particles created when cosmic rays from space collide with atoms in Earth’s atmosphere. They are harmless and “rain” on us all the time. “It’s natural radiation,” Bross said. “They’re passing us now.”

Cosmic ray muons are able to pass through solid objects more efficiently than X-rays, allowing us to observe normally impenetrable structures. As they move through the pyramid, these particles interact with different materials – granite and limestone, for example, or even the air in the cavities -, deflecting their energy and light.

The technology had already been used in 2017, as part of a project called “ScanPyramids”, which revealed one of the pyramid’s most significant discoveries: the existence of a large void, hidden above a well-known passage called the “Grand Gallery”. The mysterious site, dubbed the “Great Void”, is about 6 meters high and almost 30 meters long, and its function is still unknown. 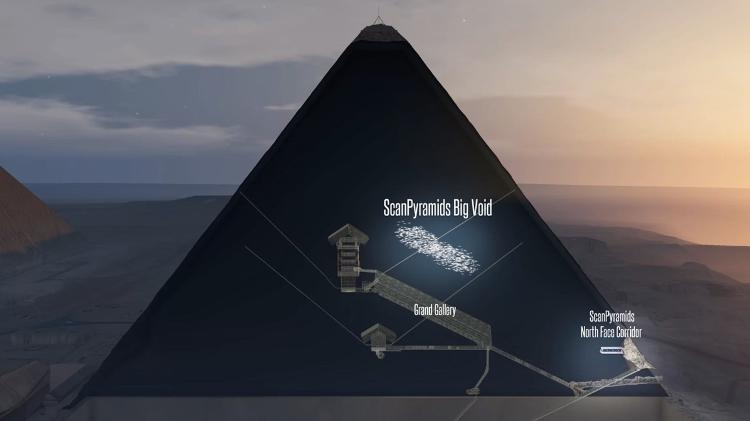 Illustration by the ScanPyramids project, which discovered “Great Void” in the pyramid

The most fantastic possibility is that it is the secret burial chamber of Pharaoh Khufu; the less interesting option is that it is only a necessary access for the construction of the pyramid. Either way, it may contain objects and other traces of civilization to be studied.

How will it work?

Now, the scientists want to do a complete muon tomography to create detailed maps, with high-resolution images, of the interior of the entire structure. The plan was explained in a study published this week in the Journal for Advanced Instrumentation in Science.

Large muon-detecting telescopes would be placed inside up to eight ordinary shipping containers, each measuring 12 meters long, 3 meters high and 3 meters wide. They would be stationed at different points around the base of Cheops, collecting observations at each position for three months at a time, according to Bross.

“As the proposed detectors are very large, they cannot be placed inside the pyramid, so our approach is to place them outside and move them along the base. In this way, we can collect muons from all angles to build the array of necessary data.”

The team has already received approval from the Egyptian Ministry of Tourism and Antiquities to install the equipment around the Great Pyramid and carry out the sweeps, but it still needs sponsors. Currently, there is funding only for simulations and some prototypes.

* With information from NBC and Live Science

CPTT, Baja de Loulé, João Ferreira: readjustment in the calendar in search of “good results in both”