Atka Bay, in Antarctica, is home to thousands of emperor penguins who are now living with a strange visitor: a 1 meter tall autonomous robot. But the intruder is not there for nothing. Its aim is to replace humans in animal research and conduct other measures to protect them from the threats caused by climate change.

The project is an initiative of the Woods Hole Oceanographic Institution, based in Massachusetts (USA), dedicated to studies of marine life. Named ECHO, the robot was placed in a colony of penguins to move silently among them, without frightening them or affecting their behavior, and storing as much information about them as possible.

It works as an unmanned ground vehicle and remotely controlled by scientists. The feature has a mobile antenna that transmits data to a distant observatory that monitors about 300 penguins each year.

The researchers’ effort seeks to find ways to prevent a possible extinction of penguins at the South Pole of the planet. According to a study published in 2021 by Global Change Biology, 98% of the Emperor Penguin population could disappear by 2100 if greenhouse gas emissions continue to rise at current levels, leading to warming temperatures and melting Antarctic sea ice.

“Emperor penguins live in a delicate balance with their environment. If there is too little sea ice, the chicks can drown when the ice breaks sooner. But if there is too much sea ice, foraging trips [busca e a exploração de recursos alimentares] become very long and strenuous, and the young can starve to death,” study author Stephanie Jenouvrier, a seabird ecologist and scientist associated with the Woods Hole Oceanographic Institution, said in a statement.

Emperor penguins also serve as sentinel species, as their behaviors and organizations help reveal if something is wrong with their ecosystem, especially if the problem is linked to the climate crisis. As Antarctica is not the easiest place for scientists to access, the ECHO robot can carry out its expeditions there without adversely affecting the colonies. 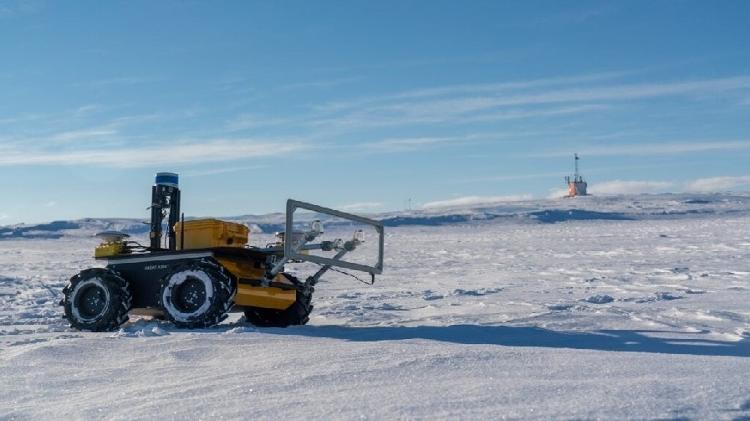 ECHO robot on its Antarctic expeditions.

Scientists tag 300 penguin chicks a year with a system similar to how dogs and cats are microchipped. Their purpose is to analyze the health status of the little ones through a long-term inspection. With simple, harmless strips of tape, the researchers attach the sensors to the chicks’ legs while the parents are away to hunt.

The integrated use of these resources and other radiofrequency identification systems contribute to the remote monitoring of penguins. But the sensors used on the pups can only be read from about a meter or two away. The ECHO robot then steps in and functions as a wireless receiving station, automatically retrieving data from the penguins’ sensors.

This information is forwarded to the Single Observatory for the Observation and Tracking of Penguins (SPOT), located near the colony. With this strategy, experts can obtain more accurate data on tagged penguins within a population of 20,000, without relying on the observatory.

With these materials, it is possible to study the way penguins adapt to the environment that undergoes gradual changes due to climate change. Sensors also help locate them as they venture out for food and dive into ocean ice, as well as predict their foraging tactics.

For Dan Zitterbart, a scientist at the Woods Hole Oceanographic Institution, the project helps protect fauna threatened by melting ice and prevent their extinction. And ensuring the survival of penguins is a task that can bring positive impacts to the future of the ecosystem.

“Biodiversity in the Southern Ocean is so small, compared to the more temperate regions of the world, that losing any species is devastating,” explained Zitterbart. “The evolution of penguins will be able to fill every niche on the planet and ultimately create animals capable of surviving in this area.”

Minister justifies choice of Starlink for Amazon, but there is no project