Echo Show 15: Check out the screen speaker that recognizes people in the house

The Echo Show 15, launched worldwide at the end of last year, arrives in Brazil this Wednesday (11). With a 15.6-inch (40 cm diagonal) screen and built-in Alexa virtual assistant, it is Amazon’s largest smart device. Here it costs from R$ 1,804.

Tilt has already seen the product first hand and tells below the details about the launch and the first impressions.

Speaker or almost a TV?

The new Echo Show ushers in a new category of Amazon products: it’s a “smart display”, not a “smart speaker” like the other Echo’s.

“Designed to make life easier for families, the device features a new interface with widgets that allow you to leave messages, add items to your shopping list, add tasks, view shared or individual calendars, and also control compatible smart home devices from a single place”, said Jacques Benain, general manager of devices at Amazon Brazil, during a product presentation to journalists. 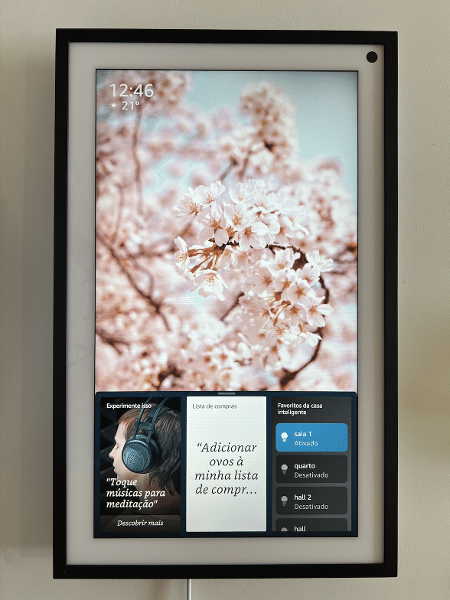 At first glance, the Echo Show 15 looks like a touchscreen information panel like those on totem poles in museums and malls.

It can be positioned vertically or horizontally — in this mode it resembles a frame. A black frame and white “paspatur” (space to the display) reinforce this look. It is recommended to install it on the wall, in portrait or landscape mode.

The launch comes with a support (like those for television, fixed with four screws and plugs included) and a paper template to avoid mistakes when drilling. If you prefer to leave it on top of a piece of furniture or counter, you must purchase a pedestal, sold separately.

With plastic construction, it is light, weighing just over 2 kg. The power supply comes with a cable of about 1.5 m – meaning it needs to be installed close to an outlet as it needs to be constantly plugged in.

Can you use it how?

A bulletin board, a picture frame, a watch, a television, a smart home device controller: these are some of the roles of the Echo Show 15.

It is possible to customize the home screen with the most useful widgets for the family, such as weather forecast, lights commands, music, calendar and the new “Sticky Notes” (“post its” that you can leave for yourself and others) .

And this is where the strength of the Echo Show 15 lies: the possibility of personalizing the content that is displayed according to who is looking at it. Just configure the profile of each resident of the house and register the face (as is done for the cell phone unlock screen) to be recognized when you pass.

Thus, there is a general screen, with shared information about the house, and a specific one for each person, with their personal agenda, their reminders, their musical preferences.

The idea is that you walk through it and stop, standing, to see your personalized page and control what you want. Requests can be made by voice, from anywhere the virtual assistant can hear, such as:

“Alexa, leave a note for my brother to walk the dog.” “Alexa, let everyone know about Sunday dinner.” “Alexa, show me my shopping list.”

Based on my first impressions, the touch feature of the product’s screen ended up being used even more than voice commands – for example, if you’re already there in front, it’s easier to click “turn off” a lamp than to ask “Alexa, turn off the bedroom light”; or when you don’t want to make noise, because someone is sleeping.

Sometimes, however, the touch response takes longer than expected, and you may not know if you have been detected for a few seconds.

In addition, some physical commands require a long movement – ​​as in a shopping mall totem –, which ends up being a little awkward, standing, for an adult used to the smartphone. But it may be better for children or the elderly.

According to Amazon, the Echo Show 15 works with an advanced processor, the AZ2 Neural Edge, which has eight cores (the more the better) and technology to work integrated with artificial intelligence. Therefore, the device is able to process facial recognition within itself, without having to access an external server.

The company says that this operating strategy guarantees information privacy and security, as it does not leave the Echo Show 15.

For recognition to work, the camera must be open. It has a physical lid, which can be opened at any time.

The camera can also be used for video calling — it works between Echo devices or smartphones with the Alexa app — and for monitoring the house, for example, watching your pets while you’re away.

If the consumer does not want facial recognition to be active, they can delete their Visual ID in the device settings or in the Alexa app. The role is optional and requires explicit consent, the company says.

With a screen this size, the video experience is a plus. When in landscape (horizontal) orientation, the Echo Show 15 plays back 1080p Full HD images. You can watch movies and series on Prime Video and Netflix streaming, which are natively integrated; Youtube content can be accessed through the browser.

For my use, I live alone and I already have Echos in the living room and bedroom, I think the kitchen would be a nice place. You can go looking at a recipe while I cook (the Cookpad and Panelinha skills are very interesting), or even watch an episode of a series.

The Echo Show 15’s screen also ends up being a decorative object. You can set the rest images on the panel—there are pre-set options and you can use your own photos as a digital frame.

The IPS LCD panel offers good sharpness, but the contrast leaves a little to be desired. So pay attention when choosing the installation location — as the glass is very reflective, lights can get in the way.

You can’t win them all. In order to have such a large screen, in a thin device attached to the wall, one feature ended up being “harmed”: the audio. Not that it’s bad. It’s quite satisfying to watch a video or put on background music.

But it doesn’t have that power to, for example, liven up a party, like the Echo Show 10 (with a rotating screen that follows you and a large speaker) or the Echo Studio (with high fidelity audio).

It is worth it?

The device is not cheap, but there is no product similar to the Echo Show 15 in the competitors – which work more with speakers.

It is interesting to function as the “digital heart of the house”, where it can be integrated with various devices, such as other Echo, smart lamps and Alexa-compatible home appliances. The screen interface is very intuitive and the voice commands hardly fail.

If you have a family and want to make your routine more digital, the Echo Show 15 can be a good investment.

Now, for those who live alone or for a young couple, you might prefer the Echo Show 10, which costs a similar amount. It offers the same smart home functions, has a smaller screen and a much stronger sound.

The launch goes on sale today on the Amazon website and major retailers in the following options:

By Fábio Mendes on August 14, 2022 10:55 am Mitch Evans has clearly evolved in Formula E and the New Zealand driver has stamped his best season in...

Stoffel Vandoorne is the Formula E world champion. The Belgian driver reaches the top of a single-seater competition, something that hasn't happened since 2015, the year he celebrated...

Inflation on the rise, and many people worried: where to invest so as not to lose money with high prices? Inflation can put your future at risk, as...

English course with certificate has 100 thousand places for free; know how to compete