Report: All aboard – Teacher says her photo was used without authorization by the airline

You Air, a newly launched company that seeks to become a subscription airline, has not yet started operations, but it may already face a legal problem. On the company’s website, there was a photo of an alleged customer identified as Ilka, praising the airline’s services, but which had an image of someone else.

in contact with the UOLteacher Jane Hir said that the photo on the page was hers, and that she did not give the image or was even consulted for use, in addition to not having talked to anyone from You Air about the statement linked to her image.

On the page, Jane’s photo appeared to be a clipping of an image of her used by the City of Curitiba in a campaign about the elderly. “The photo is mine, I did not authorize [o uso]and the text next to it is not mine,” says Jane.

“They used an image of me with a name that isn’t mine, and no one ever asked me anything,” said Jane.

The teacher’s lawyer says that a crime report will be made with the cyber crimes police station in addition to, in a second moment, seeking compensation for the misuse of her image. 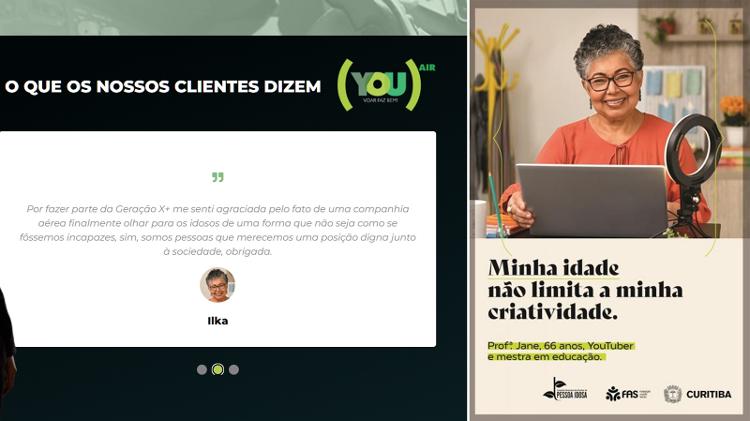 On the left, the You Air page before the change. On the right, teacher Jane Hir campaigning in Paraná

Sought, the company said the photo was immediately removed from the page. The company also claims that it paid a graphic designer to use an image bank and has already taken action.

The teacher’s photo appeared in a section with alleged clients without even having started operations. The company was founded in March 2022, and among the photos of alleged clients are two women, one named Michele and the other Roseli, as well as Ilka (whose image is allegedly of Jane Hir).

It so happens that the two images are found on several other websites, with different names, such as Anne and Alice, Alex and Christine, or Chris Roussel and Daniele, Meire Yoshida, among others.

One of the alleged customers even appears on a page that generates random profiles of people, where 200 faces are gathered to be used in page and application tests.

About this, the company says that these images are on several platforms because the page designer bought and used a template that already came with the photos.

You Air still claims it has no customers.

After the remarks made by the UOLthe “Customers” section of the website’s homepage had the photos removed and changed to “What People Say”, keeping the testimonials and names that were before.

In a telephone conversation with two partners of the company, Ramauri Mello Justin and José Carlos Ricardo, it was said that it is not known whose testimony is still on the website. The testimony there would be about the company’s concept, and not necessarily about customers, since the company is not yet operating.

Previously, during this week, the page containing the company’s team, formed by former Itapemirim employees, businessmen and a military pre-candidate for senator, was removed.

For Vinícius Ehrhardt Julio Drago, criminal lawyer at Alamiro Velludo Salvador Netto Advogados Associados, the scenario presented, in theory, constitutes a crime provided for in the Consumer Defense Code, which provides for detention from three months to one year and a fine for those who “make a false statement or misleading, or omit relevant information about the nature, characteristics, quality, quantity, safety, performance, durability, price or warranty of products or services”.

“Still, for its characterization, the deceit must be proven, that is, the effective intention to deceive the consumer about the quality of the service offered, which seems distant”, says Drago.

Former employees of Itapemirim, businessmen and a military pre-candidate for senator came together to create a new airline in Brazil, You Air.

The company makes an innovative promise: to sell flights “by subscription”, and not each ticket individually. In the model proposed by the company, there will be three ranges of plans that can be purchased with You Coins, a utility token (similar to a digital currency) operated by the company that costs US$ 1 (R$ 4.80) per unit.

Plans range from 87 You Coins to 682 You Coins, depending on the range and period chosen for the trip. Dates like the end of the year and Carnival are more expensive.

Each plan serves an age group and allows one round trip per year between the destinations selected by the company, including Florianópolis (SC), Ilhéus (BA) and Vitória (ES). The company adopts a unique model in the country and will still have to go through the analysis and authorization of Anac (National Civil Aviation Agency).

More than R$ 12.8 million were raised in the month of July this year alone, with the 32 auctions carried out by the National Secretariat for Policies on...

Appointed by minority shareholders are elected to the Petrobras Board

Those appointed by minority shareholders Marcelo Gasparino and Juca Abdalla are already elected to the Petrobras Board of Directors, informed the chairman of the Extraordinary General Meeting (AGE)...

Veterans and billionaires: The world’s oldest rich have something in common