The INSS (National Social Security Institute) was sentenced by the Court to pay compensation of R$ 2,500 in moral damages to a resident of Marília, in São Paulo, for the improper transfer of her data to banks. His information, according to the lawsuit, was used by financial institutions to offer services and loans through various telemarketing calls.

According to the decision of the TRF-3 (Federal Regional Court of the 3rd Region), determined on the 15th, the INSS and Dataprev (Company of Technology and Social Security Information) leaked data from the insured without due consent and violated the rules of the LGPD (General Data Protection Law), legislation that obliges companies and governments to protect the privacy of personal information.

The decision is still subject to appeal. In the process, both public bodies said that the situation presented by the woman is casual and that they cannot be held responsible for the contacts by banks.

Sought by the report, the INSS and Dataprev have not yet responded to questions about the case. The text will be updated in case of manifestation.

Tilt had access to the judgment of the TRF-3 and the vote of the rapporteur of the case, federal judge Janaína Gomes. In it, the magistrate lists a series of evidence presented by the woman about the disturbance of peace by the companies.

On June 7, 2021, the death pension benefit paid by the INSS was granted to the woman. A few days later, different financial institutions started to get in touch via telemarketing calls and messages via SMS and WhatsApp with daily service offers.

In 11 recordings of telephone contacts received by the woman, Itaú, Pan, BMG and Safra are mentioned, in addition to the card operators Servcred and Visa. All offers are payday loan or credit card. 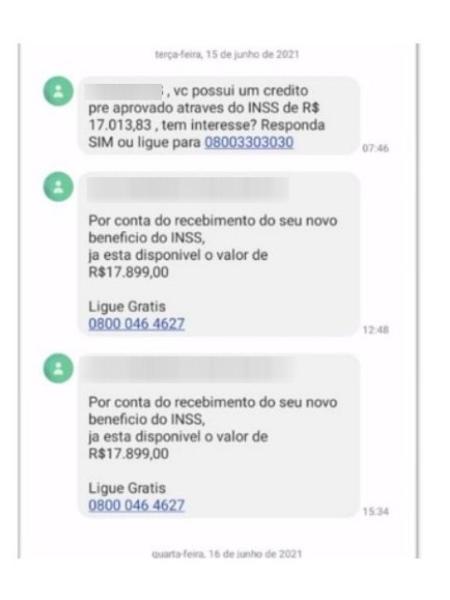 SMS received by woman with offers after death benefit

In one of the audios, the person who makes the call identifies himself as an authorized bank correspondent of Banco Itaú, and who is contacting him regarding the granting of the released death pension, offering an amount for consigned credit.

In another audio, the woman even mentions that her pension is only R$ 1 thousand, but the person on the other end of the line says that the system says “a little more”.

In a third recording, the professional on the other end of the line tries to convince the woman by informing “reduced interest rate, with credit released on the same day for retirees or INSS pensioners.”

In addition to the calls, the woman presented “numerous messages received via SMS” as of June 17, just ten days after the benefit was granted. In one of them, she says that the contact is “due to the receipt of her new benefit”.

By WhatsApp, contacts started 15 days later, on June 30. In one of the messages, the company says that it is from the INSS call center, with an offer of consigned credit “exclusive for your benefit of the INSS”.

For Judge Janaína Gomes, the situation with the beneficiary shows, on the part of the INSS, “a lack of control and security in its database, affronting the right to privacy of its beneficiaries”.

The decision to condemn the body is based on article 42 of the LGPD. The passage obliges the controller or operator of the information to indemnify the injured person.

“The moral damage remained characterized. The approaches suffered by the author far exceeded normality. In addition, the fact that data about her patrimonial life were shared irregularly also harm her own safety”, highlights federal judge Janaína Gomes.

“Finally, this incessant disorder occurred for around 15 days, at least, that’s what is shown in the records, and at a difficult time in her life, given the recent loss of her husband and the medical treatment she was undergoing. “, he adds.

The magistrate also states in the decision that “it would be up to the INSS to implement administrative measures aimed at avoiding the violation of personal data under its tutelage, which, as is known, has not been happening, given the easy access to confidential information of beneficiaries by financial institutions “.

What is the role of creative leaders for the communication industry?

Brazilians have already paid BRL 1 trillion in taxes in 2022