All aboard – How is the interior of the giant Beluga, a plane that has been talked about

The arrival of the Beluga, the Airbus supercarrier plane, caused a stir. For the first time in Brazil, he visited the airports of Fortaleza (CE) and Viracopos, in Campinas (SP). Inside, it brought an unprecedented cargo: the world’s first ACH160 helicopter, which was sold to a Brazilian customer.

There are two Beluga models: the Beluga ST, the same model that came to Brazil, and the Beluga XL, larger than the ST and developed from the A330.

The ST version, developed from the A300-600, currently provides cargo services to several customers around the world. The Beluga XL, on the other hand, focuses on transporting parts and pieces from the company’s planes for final assembly at the company’s factory in France.

Wings, fuselages, stabilizers, among other range of parts are transported on board.

To accommodate the load, the Beluga lifts the “forehead” of the aircraft, which is above the cockpit.

As a result, it can handle large loads, and this plane has the largest volume capacity today. In volume, the Beluga is larger than the Antonov An-225, the former largest cargo plane in the world that was destroyed in the Ukrainian war, and the Lockheed C-5 Galaxy, used by the United States armed forces. However, the Frenchwoman’s plane does not carry loads as heavy as the Antonov. The Beluga ST carries loads of up to 40 tonnes and the XL up to 44 tonnes, while the An-225 carried up to 250 tonnes of payload.

See in the following images a little more about the Beluga, both the ST and the XL, inside: 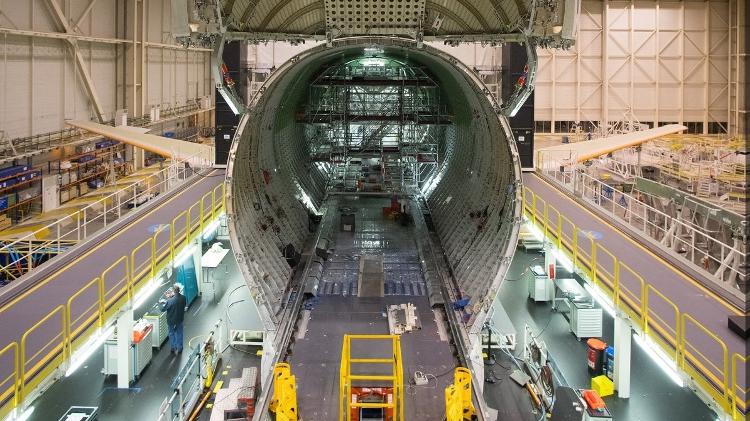 The interior of the Beluga XL is up to 8.1 meters wide and 7.5 meters high, the largest compartment in a transport plane in the world. 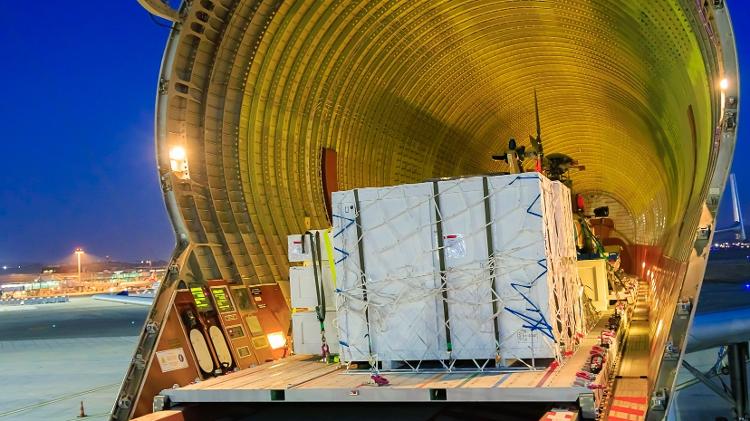 The Beluga’s size allows it to be loaded with room to spare with other aircraft, like the H225 helicopter pictured. In front is a container with cargo and the helicopter, without the blades, is in the background.

The front fuselage section of the first A350 XWB was transported inside the Beluga XL from Saint-Nazaire to the final assembly line in Tolouse, both in France.

The crew that brought the ACH160 on the Beluga ST to Brazil in late July.

The empty interior of a cargo compartment of the Beluga ST. In it, it is possible to transport other parts of planes in addition to whole helicopters and other types of cargo.

Second busiest in the country in terms of number of passengers, Congonhas airport, within the city of São Paulo, should be granted today by the federal government to...

Brazil owes deflation of 0.68% in July (that is, inflation was negative). This is positive for consumers. But what happens to investments that are adjusted for inflation, as...

The Court of Justice of the State of São Paulo dismissed the request for compensation for moral damage by the technical director of Proz Educação, Juliano Pereira dos...

President Jair Bolsonaro (PL), candidate for reelection, said this Wednesday, 17, that the government has not yet defined the percentage of the salary readjustment to federal civil servants...

Chip startups that use light instead of wires attract investors